An island nation in a global sea

President James A. Michel tells a remarkable story of how a small nation is coming to terms with globalisation. It reflects his own vision of the New Seychelles. For ten years he has led his nation and this book offers a timely opportunity for reflection.

It has not been an easy journey. The economy was already the subject of a major overhaul when, in addition, a way had to be found to counter the impact of global financial crisis. As if this was not enough, Seychelles has been on the frontline in countering the constant threat of Somali pirates on the high seas. In Spite of these challenges, this has also been a time of further domestic progress: investment in education and health has increased, and the country has opened its own university. Each year more tourists choose to visit this tropical idyll, lured by the warmth of its people as well as the exotic environment.

Meanwhile, Michel has worked tirelessly to strengthen ties across the Indian Ocean and to play a bigger role on the African continent. As a representative of a small island nation and a champion for the environment, his voice is widely heard and respected on the international Stage. It is in no small measure due to his own efforts that the United Nations has designated 2014 as the International Year of Small Island States.

Drawing on his own speeches, this book will be of interest not only to those who already know Seychelles, but to anyone who is fascinated by the many dimensions of change in the modern world.

It tells the unique story of 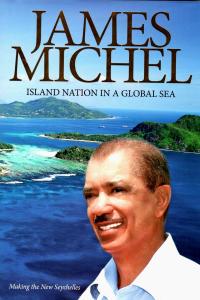 an island in a global sea.

2014-10-24
Georges
Previous: James Michel – A man of the people
Next: Distant Horizons My Reflections