How the humble coconut is making a huge comeback in Seychelles 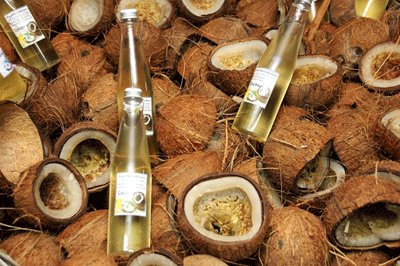 The use of coconut products in beauty and skincare has long been a tradition in Seychelles. The oil is still a popular product for cooking, skin lotion and hair products. The L’Union Estate and the Island Development Company are the two main companies in Seychelles still making use of this natural resource. (Romano Laurence, Seychelles News Agency)

From make-up remover, eyelash conditioner and massage oils; it seems that freshly-pressed virgin coconut oil with no chemicals added is the next big thing in beauty products.

In an article published on the website of the Daily Mail, celebrities including Gwyneth Paltrow, Sadie Frost and model Gisele Bundchen have sung praises about the use of the product that has been a favourite among women for hundreds, if not thousands of years.

The milky extract from grated and pressed coconut flesh is purported to be a good remedy for stretch marks and can also reportedly improve the whiteness of teeth.

In the United Kingdom, the rising popularity of coconut oil means that a jar of virgin oil can be sold at around £6 (just over $9) and the wonder product is being hailed as a potential replacement for “every product in your bathroom cabinet”.

One of the most common uses of coconut oil is for the treatment of hair. Traditionally, women in tropical countries such as the Seychelles have long used it to keep their hair soft and shiny.

During the first half of the 20th century, hundreds of inhabitants of the Seychelles worked on and earned their livelihoods from the many vast coconut plantations that covered almost 25,000 acres of land, but by the 1960s, the mainstay of the Seychelles economy had slid into decline, to be replaced with a rapidly-growing tourism sector anticipating the completion of its first international airport in the early 1970s.

Coconut oil is extracted by leaving the inside of the nuts in the sun to dry and harden then pressed or simply removing the inside, scraping it and heating it in a container.

A bottle of coconut oil can be sold for less than a dollar whilst processed and manufactured creams, which are imported mainly from neighbouring countries such as South Africa, are being sold at almost the same price in shops in the archipelago. 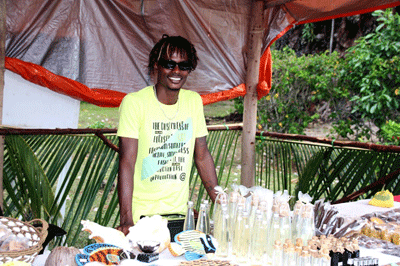 A man sells coconut oil and other products in a stall on La Digue, the third most populated island of the Seychelles. Pure coconut oil displayed in quaintly-designed bottles makes for a popular souvenir for visitors to the archipelago, selling at less than one dollar per bottle in most shops. (Romano Laurence, Seychelles News Agency) Photo license: CC-BY

“The virgin coconut oil does not have chemicals in it. It is natural but its smell is very strong, thus manufactured products are better,” says 33 year old Therese, who has coarse, medium-length hair.

Murielle, in her early 50’s, is transitioning from chemically-relaxed hair to her natural coarse hair for the past six months and she uses natural coconut oil frequently.

“It is not sticky compared to mousse and other hair products, however it tends to make your hair grow faster and with the heat it can also encourage hair to change colour,” Murielle told SNA.

A coconut comeback for Seychelles?

In the Indian Ocean Island of 90,000 people, one of the most popular places where various products are made from coconut is on La Digue, the third most populated island of the archipelago.

Using a traditional mill, coconuts that have been left to dry for several days are pressed to get fresh oil.

“We make 25 litres of coconut oil per day but we easily run out of stock as people send [coconut oil] to other islands or re-use it in other ways such as to fill souvenir bottles and so on,” says Keddy Nibourette, the Chief Executive Officer of the parastatal company which has been running the estate since the early 1980’s.

“With increase in demand, we will soon be purchasing an electric machine that will help increase our output.”

On the old plantation, coconuts are collected by the thousands under majestically overgrown trees.

“We collect over 1,500 coconuts per day and we have people who are assigned to remove the husks, others breaks the shell so that the inside can turn hard into what we call copra,” says Nibourette, adding that one worker can de-husk around one thousand coconuts per day.

This is also an attraction to the visitors to the estate, which is the only access road to the renowned beach of Anse Source d’Argent.

A levy of seven dollars is imposed on each visitor at L’Union Estate, which covers over 20 hectares of land.

With the increase in demand for coconut products, another parastatal company, the Seychelles Island Development Company (IDC), which manages some of the outer island of the archipelago, has also started its own venture into the purest form of the highly sought-after product.

Nowadays, coconuts are often sold in markets and in shops for as low as one dollar, but are not always too easy to come by as the old plantations gradually made way for tourism developments and residential areas.

For now, though, it still remains to be seen if the echo of international demand could finally engineer a small-scale revival of the ancient coconut industry of the Seychelles. 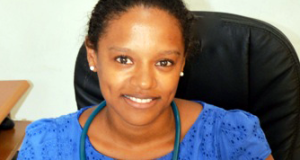 How can I protect myself from any health issues related to tattooing and body piercing?