The Aldabra giant tortoise (Aldabrachelys gigantea), from the islands of the Aldabra Atoll in the Seychelles, is one of the largest tortoises in the world. The carapace is a brown or tan color with a high, domed shape. It has stocky, heavily scaled legs to support its heavy body. The neck of the Aldabra giant tortoise is very long, even for its great size, which helps the animal to exploit tree branches up to a meter from the ground as a food source. Similar in size to the famous Galápagos giant tortoise, its carapace averages 105 cm (41 in) in length with an average weight of 120 kg (260 lb). Females are generally smaller than males, with average specimens measuring 90 cm (35 in) in length and weighing 150 kg (330 lb).

Historically there were giant tortoises on many of the western Indian Ocean islands as well as Madagascar and the fossil record indicates that there were once giant tortoises on every continent and many islands with the exception of Australia and Antarctica. It is believed that many of the Indian Ocean species were driven to extinction by over-exploitation by European sailors and it would seem they were all extinct by 1840 with the exception of the Aldabran Giant Tortoise on the island atol of Aldabra. Although it appears there may be some remnant individuals of A. g. hololissa and A. g. arnoldi in captivity, in recent times these have all been reduced as subspecies of A. g. gigantea

This species is widely referred to as Aldabrachelys gigantea, but in recent times attempts were made to use the name Dipsochelys as Dipsochelys dussumieri, but after a debate that lasted two years with many submissions, the ICZN eventually decided to conserve the name Testudo gigantea over this recently used name (ICZN 2013) this also affected the genus name for the species establishing Aldabrachelys gigantea as nomen protectum.

The Seychelles giant tortoise (A. g. hololissa) has been thought to be extinct since the mid-19th century due to overexploitation on the granitic Seychelles islands. Similar giant tortoise species on other Indian Ocean islands such as Mauritius, Réunion, and Rodrigues Island are also extinct.

This species inhabited islands of the Seychelles group, where it thrived on vegetation on the edges of marshes and streams. By 1840, it had disappeared from the wild and was assumed to be extinct. As a grazing species, it somewhat resembled the Aldabra giant tortoise (A. g. gigantea) with its domed shape.

In 1999, some Seychelles island tortoises (12 known individuals) were suggested to have survived in captivity. The report of oddly shaped captive tortoises prompted the Nature Protection Trust of Seychelles to examine the identity of the living tortoises. Examination of museum specimens of the “extinct” Seychelles species by Dr. Justin Gerlach and Laura Canning seemed to show some living tortoises possess characteristics of the extinct species. With DNA testing, tortoises of the “extinct” species were identified and were acquired by the Nature Protection Trust of Seychelles for conservation. They were brought to Silhouette Island, where the only breeding population exists.

A roughly 182-year old tortoise on Saint Helena, named Jonathan, is believed to be a survivor of the species (as well as potentially the oldest living land creature in the world). 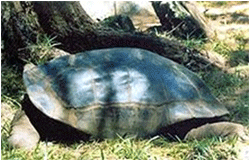 The report of oddly shaped of tortoises in captivity in the mid-1990s prompted the Nature Protection Trust of Seychelles to investigate the identity of these captive tortoises. Examination of museum specimens of the ‘extinct’ Seychelles and Arnold species seemed to confirm some living tortoises do show characteristics of the supposedly extinct species. However, some recently published scientific papers on the genetics of the Seychelles and Indian Ocean tortoises provide conflicting results. Some studies suggest only one species was ever present in the islands, whilst others suggest three distinct, but closely related species.

These different views derive from studies of different genes. A synthesis of all available genetic data indicates Arnold’s tortoise is genetically the most distinctive Aldabrachelys tortoise This fits with the ecology and morphology of the species, as a highly distinctive tortoise adapted to feeding on low vegetation rather than the grazing habits of the Seychelles giant tortoise and Aldabra giant tortoise. Due to its unusual ‘saddlebacked’ shape, this is the only Seychelles tortoise species that regularly basks in the sun. The other species will do so occasionally, but Range and distribution. 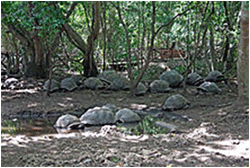 An isolated population resides on Changuu island in Zanzibar

An isolated population resides on Changuu island in Zanzibar

A peculiar kind of habitat has coevolved due to the grazing pressures of the tortoises: “tortoise turf”, a comingling of 20+ species of grasses and herbs. Many of these distinct plants are naturally dwarfed and grow their seeds not from the tops of the plants, but closer to the ground to avoid the tortoises’ close-cropping jaws.

As the largest animal in its environment, the Aldabra tortoise performs a role similar to that of the elephant. Their vigorous search for food fells trees and creates pathways used by other animals.

Little fresh water is available for drinking in the tortoises’ natural habitat, so they obtain most of their moisture from their food.

The Aldabra tortoise has two main varieties of shell. Specimens living in habitats with food available primarily on the ground have more dome-shaped shells with the front extending downward over the neck. Those living in an environment with food available higher above the ground have more flattened top shells with the front raised to allow the neck to extend upward freely.

Tortoise turf is composed of the following plant species:(Grubb, 1971; Hnatiuk 1979) 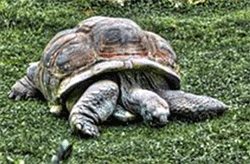 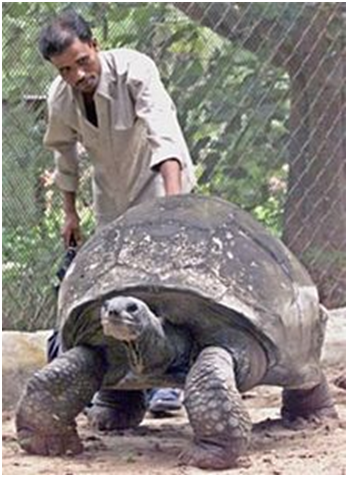 Adwaita: 254 years old at the time of the photograph at Kolkata zoo in India

Aldabra tortoises are found both individually and in herds, which tend to gather mostly on open grasslands. They are most active in the mornings, when they spend time browsing for food. They dig underground burrows or rest in swamps to keep cool during the heat of the day.

While they are characteristically slow and cautious, they are capable of appreciable speed. They are also known to attempt perilous acrobatic feats, rising precariously on their hind legs to reach low branches.[citation needed] They risk death by tipping onto their backs and being unable to right themselves. This unusual behavior led famous Mexican biologist José Antonio de Alzate y Ramírez to famously refer to the Aldabra as the “ninjas” of the tortoise world.

Large tortoises are among the longest-lived animals on the planet. Some individual Aldabra giant tortoises are thought to be over 200 years of age, but this is difficult to verify because they tend to outlive their human observers. Adwaita was reputedly one of four brought by British seamen from the Seychelles Islands as gifts to Robert Clive of the British East India Company in the 18th century, and came to Calcutta Zoo in 1875. At his death in March 2006 at the Kolkata (formerly Calcutta) Zoo in India, Adwaita is reputed to have reached the longest ever measured life span of 255 years (birth year 1750). Today, Jonathan, a Seychelles giant tortoise, is thought to be the oldest living giant tortoise at 182 years old and Esmeralda second at 170 years old, since the death of Harriet at 176, a Galapagos giant tortoise. Esmeralda is an Aldabra giant tortoise. 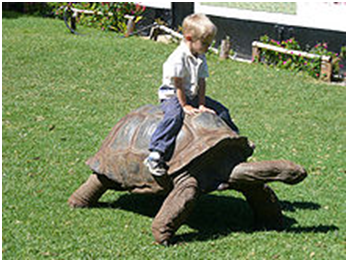 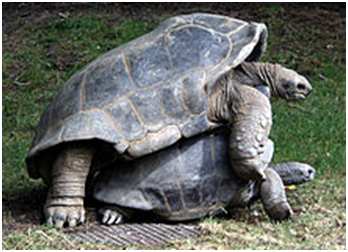 Between February and May, females lay between 9 and 25 rubbery eggs in a shallow, dry nest. Usually less than half of the eggs are fertile. Females can produce multiple clutches of eggs in a year. After incubating for about eight months, the tiny, independent young hatch between October and December.

In captivity, oviposition dates vary. Tulsa Zoo maintains a small herd of Aldabra tortoises and they have reproduced several times since 1999. One female typically lays eggs in November and again in January, providing the weather is warm enough to go outside for laying. The zoo also incubates their eggs artificially, keeping two separate incubators at 27 °C (81 °F) and 30 °C (86 °F). On average, the eggs kept at the latter temperature hatch in 107 days.

The Aldabra giant tortoise has an unusually long history of organized conservation. Albert Gunther of the British Museum, who later moved to the Natural History Museum of London (enlisting Charles Darwin and other famous scientists to help him) worked with the government of Mauritius to establish a preserve at the end of the 19th century. The related, but distinct, species of giant tortoise from the Seychelles islands (Seychelles giant tortoise A. g. hololissa and Arnold’s giant tortoise A. g. arnoldi) are the subject of a captive-breeding and reintroduction program by the Nature Protection Trust of Seychelles.

Arnold’s tortoises rapidly lose heat from the skin of their exposed necks and need to heat up in the sun in the mornings.

A captive-breeding program was established in 1997, and in December 2006, the five adult tortoises were returned to the wild on Silhouette Island, forming the first wild population of this species since the early 19th century.