The Parish of Anse Royale is 150

This year marks the 150th anniversary of the Catholic Parish of Anse Royale.

When Father Ignace Galfione (1815-1881) arrived in Seychelles in October 1864 to assume the post of Vice-Apostolic prefect of the Catholic Church, the archipelago was a cauldron of religious fervor with the Catholic Church and the Anglican Church vying for the souls of the inhabitants who were mostly descendants of slaves.

Galfione came in the churning wake of his predecessor, FatherJeremie de Paglieta (1820-1871) who had built the First Chapel at Anse Royale in the mid-1850s. The small structure of wood with thatched roof was destroyed during the great cyclone of 1862, and was replaced by a similar structure. In its effort to reach and evangelise the maximum number of inhabitants, the catholic mission was obliged to create little outposts in all the districts on Mahe and on Praslin and La Digue. And Anse Royale, being the place where the first settlement of Jardin du Roi was created in 1772 had a population that needed a place to worship. In 1866, Father Galfione declared Anse Royale a parish, the sixth to be named after Victoria (1853) Anse Aux Pins (1853) Baie Ste Anne Praslin (1853) and La Digue (1853).

The first Parish Priest of Anse Royale was Father Valentin de Reyvroz (1836-1883) who stayed from 1868 to 1875. Galfione presciently predicted the growth of the Parish by establishing a school there, the management of which he entrusted to a group of nuns of the St Joseph de Cluny convent who came to reside in the district. Such was his indefatigable spirit and his veneration for the husband of Jesus’ mother that in 1878 he created the Parish of St Joseph at Grand Anse Praslin where a small chapel of pandanus leaves offered spiritual sanctuary to the inhabitants, with FatherAnge Fauvre (1848-1924) as the parish priest.

During the last two decades of the 19th century, the parish of Anse Royale was devotedly served by capuchins Savoyard priests, among whom the memory of Father Philibert Meynet (1841-1903) who is buried in the Parish cemetery marked, perhaps may we say, the more turbulent chapters of the parish history. It was at a time when the Anglican Church was equally diligently making progress in their evangelism and building up their congregation. In 1845, long before the arrival of the First Catholic Missionary, FatherLeon des Avanchers (1825-1879), a school was opened. It doubled as a chapel. In 1887, the Anglican parish was created and in 1889, the St Saviour’s Church was built on the same stretch of coastline about 800 feet north of the catholic chapel which by then had been rebuilt with stone, whereas, it would be over forty years later that the catholic parishioners received the Eucharist in a church. In 1882, a belfry was added to the Chapel. It was blessed that same year on October 22 by Father Edmond Dardel (1825-1890). 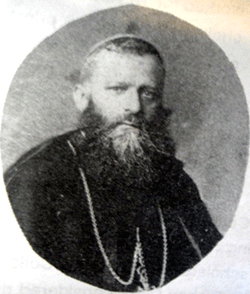 It was Mgr. Justin Gumy(1869-1941) who initiated the construction of the actual St Joseph Church. Having arrived in Seychelles as a priest in 1903 where he had also served as the Parish Priest of Anse Royale, he saw the absolute need for a church that would serve its purpose for many decades to come – in other words, a structure with a certain ecclesiastical dignity. To achieve his goal he enlisted the competent assistance of Father Victorin Gevisiez(1896-1969) the priest of La Digue. Thus, in 1930 this intrepid missionary who had arrived in Seychelles in 1925, came over across periculum maris (the perils of the sea) to construct a church at Anse Royale.  A deed of purchase dated on January 15, 1879 affirms that the Roman Catholic Mission of Seychelles acquired its first piece of land at Anse Royale. Masons and labourers of the parish worked for many months under his meticulous guidance; burning granite boulders so that they could be broken into manageable pieces which were then beatened or flattened into the required shape, limestone corals were burnt to obtain mortar, and centenarian trees where cut to obtain the best timber for the ridgepole and rafters. In June 1931, the church was completed and the statue of St Joseph was placed on the ridge at the front. Stimulated by the magnificent result he had achieved, FatherGevisiez decided to build a school for boys as well. 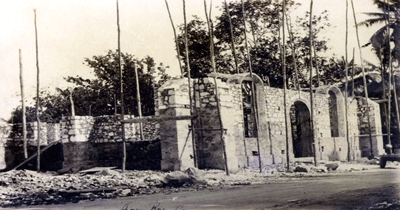 In 1940, FatherGevisiez left the parish and he was succeeded byFatherJean de la Croix(1910-1987) who rebuilt a school for girls. During the war years, it was Father Serge Lugon (1905-1980) who offered spiritual solace to the parishioners, among whom many lamented the absence of their menfolks who were then going through the horrors of war on the battlefields of Tobruk. At Anse Royale, like elsewhere on Mahe, landowners and families who had a little plot of land cultivated patchouli plants which at their highest remunerative price fetched R450 a kilo. The district was a fishing village with all its characteristic charms. There was a grotto called ‘La Grotte de Notre Dame de Lourdes’, by the roadside, an old hospital made of stone and a public drinking fountain. Houses of corrugated iron had pitched roofs and were perched on piles of stones on four corners. Men and women toiled on coconut estates and cinnamon plantations. Fishermen went out to sea in pirogues and came back to shore at the end of the day loaded with the piscatorial marvels of Neptune. 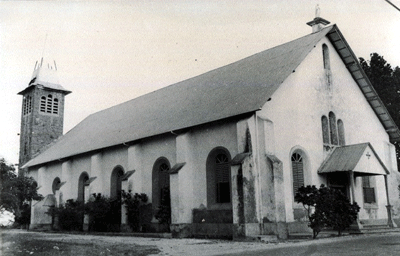 Years passed…. In 1956, the Patronal Feast of St Joseph the worker, on May 1, was celebrated for the first time at the request of Pope Pius XII (1876-1958). In 1958, Mgr Olivier Maradan (1899-1975) whose thirty-five-year-old episcopacy was devoted to the construction of mission schools, churches and presbyteries, could not ignore the dilapidated condition of St. Joseph church. Extensive renovations were carried out on the entire building with the walls being rough casted with plaster.

In 1966, Father Louis Dyer (1911-1977) celebrated the centennial anniversary of the parish of St. Joseph. That same year, in May, the parishioners welcomed the Apostolic Delegate, Mgr.Guido del Mestri(1911-1993) who was on a week’s visit to Seychelles. A new primary school for boys comprising 12 classes was constructed byBrother Michel Gabioud (1921-2007) to accommodate the increasing number of children in the district. During that centennial year, the Parish of St Joseph collected R747 for the Propagation de la Foi, which contributed financial assistance to the sacerdotal community. Years passed….decades passed. At the dawn of the millennium, it was sadly evident that the St Joseph church would need a complete overhaul. In other words, massive renovation work had to be carried out on the structure of the building. During the last year of his episcopacy, in 2002, Mgr.Xavier Barronet (1927-2012) expressed his concern regarding the dilapidated state of the church. Soon after, in 2004, extensive work on the building began and the parish priest, FatherDavid Alcindor tended to his congregation in a small hall in the school compound nearby. On Sunday April 24, 2005, Mgr.Denis Weihe re-consecrated the new magnificent St. Joseph Church of Anse Royale. Surely, there must have been at least a few octogenarians of Anse Royale present at the ceremony who, when they were children, had attended the inaugural blessing of that same church in 1931…. 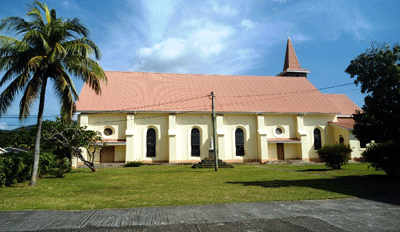 It was in 1479 that a Fransiscan Pope,Sixtus IVauthorised the church in Rome to celebrate a feast of St Joseph on March 19. In 1870, Pius IX created St Joseph Patron of the Universal Church. During its 150 years of existence, the parish of Anse Royale has witnessed the baptism, nuptials and burials of thousands of its parishioners. The legacies of many priests are enshrined in the history of the parish. Here, so very far away from the altars where they took their vows, they trudged through coastal woodlands and traversed forested hills during the course of their pastoral work… FatherGabriel Marie Zelger(1867-1934) Father Eustache Sallin (1888-1965). And there was SisterStephanie de Jesus (Simone Anonville) (1911-1967) who spent the last decade of her short life caring for the school children and decorating the church. Since its original construction, over eighty years ago, the St. Joseph Church has also served as a navigational beacon to the fisherman of the south of Mahe who returned ashore long after sundown. With a single glance inland, he would distinguish the white edifice in the darkness and know that he is off the coast of Anse Royale.