Thirty years ago SEYPEC (The Seychelles Petroleum Company) assume responsibility to provide the Seychelles Nation with one of its most fundamental needs: FUEL. Tony Mathiot takes us back to the past.

Can you imagine that? Long before electricity, kerosene, gasoline and liquefied petroleum gas became mundane features and yet necessities of life, our sources of fuel were … our forests. They provided us with timber and firewood. Lots of timber and lots of firewood. 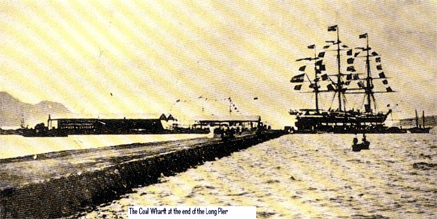 The first inhabitants who arrived in Seychelles in 1770, and settled on the island of Ste Anne did not take for granted, the valuable importance of wood as fuel, because it was an essential factor in the establishment and development of the settlement which anyhow, due to Colonial inertia was abandoned only a couple of years later.

In 1778, when Charles Routier de Romainville (1742-1792) arrived with his contingent of soldiers and a group of slaves to create the first settlement on Mahé – L’Etablissement du Roi, he must have seen, in the vast, verdant, forested mountains of Mahé, an inexhaustible supply of fuel. Limitless. Abundant.

Indeed, during the years of French occupation, when the arrivals of African slaves increased the population of inhabitants, cooking fires consumed great quantities of trees which were felled with quotidian frequency and unscrupulous indiscrimination.

Fish, turtle meat, plantains and cassava were cooked with capucin, bois mapou, bwa-d-fer, takamaka, and with perhaps even bwa gayak. In the evening, the commandant’s residence was lit with candles and paraffin lamps.

In 1810, when the British took possession of the Seychelles, the lowland forests of Mahé still provided the almost 4,000 inhabitants with their sole source of fuel. At that time, Mahé was the typical 19th century colonial outpost struggling to establish the foundations of its prospective agricultural economy, and L’Etablissement du Roi had expanded, with the gradual construction of more buildings and basic amenities, being the noble accomplishments of French commandant Jean-Baptiste Quéau de Quincy (1748-1827).

In 1841, when the town was renamed Victoria, commissioner Charles Etienne Mylius (1795-1873) initiated the building of a jetty with a grant of £50 from Mauritius, of which Seychelles was by then a dependency. The jetty which projected 200 feet towards the sea was a start in a bid to make Victoria an important seaport. A lighthouse was erected in 1872 when ships of the British East India Company and those of the Messageries Maritime were arriving at regular intervals to bring mail and cargoes of goods and to take away the country’s export produce, which was mainly coconuts and coconut oil. Those ships were of course steamers that ran on coal, and it soon became temptingly apparent that provisioning those ships with their fuel requirements would be a lucrative business for the colony. Mahé could produce many tons of coal.

In 1875, Hodoul Island was leased to Dr Henry Brooks (1831-1920) the chief medical officer, for the establishment of a coal business. The place had the capacity to hold 2,000 tons of coal.

In 1876, the chief civil commissioner Charles Spencer Salmon (1832-1896) made a proposal to the colonial secretary for the construction of a coal depot at a cost of £ 300. Felix Desiré Cheyron (1840-1896) who was the French Consular agent from Marseilles, had expressed his intention to rent the place for Rs. 200 per annum. The depot known commonly as the coal Wharf was basically a square at the end of the jetty measuring 91 feet in width and 91 in depth. There existed also, about 50 yards from the end of the pier, an islet measuring 73 feet by 86 feet which was also leased to Cheyron for Rs. 50 per annum. It eventually became known as Coal Shed Island. The jetty which Mylius had started and which had, over the succeeding years and during the administrations of various commissioners and administrators been lengthened, was now 3,179 feet long by 21 feet wide.

Coal was produced on a weekly basis from the forests of Le Niol and Sans Soucis. Many households on Mahé began to prefer the convenience of coal for cooking, especially when those cast-iron cooking pots (Marmites) were used.

It is not a surprising fact nor an appalling truth that if coal was an exceedingly remunerative business for the few who engaged in it, for the ‘charcoal burners’ of Le Niol and Sans Soucis, it was not a gainful occupation but merely a way to earn their livelihood. The constant demand for the fuel kept up a despotic demand upon the endurance of their muscles and nerves while the forests which supplied the logs of timber for burning restored their losses… to some extent.

By 1884, with a growing population of 15,000 inhabitants, among whom, avowedly only a few could afford to substitute their crude ‘coconut oil’ vessels for imported lamps, the colony’s requirements for fuel other than its own coal or wood were becoming more evident. That year saw the importation of 52 cases of Petroleum oil, 8 cases of lamps and 9 cases of matches. With the 1883 construction of another lighthouse on Denis Island, it was obviously wise to consider that the island’s need for imported fuel would gradually increase during the succeeding years. There was already a hospital, a hotel and the St. Louis College.

However, the demand for coal increased so much that in 1898 when Cheyron passed away, his coal wharf was bought by the Imperial Government for £1,030, with a view of turning Victoria Port into a veritable Naval Coaling Station. In 1889, the central portion of the coal wharf was raised about 18 inches on an area of 1,800 square yards. The granite side walls were repaired and raised to the same height on a length of 640 feet and the wall was built on a length of 55 feet where it did not exist before. And up in the humid forested slopes of Mahé, heavy chalky clouds of smoke appeared frequently.

After Seychelles became a separate colony in 1903, local consumption for imported fuel rose constantly. That came about on account of more buildings and social infrastructures that were constructed. The agricultural industry of the colony did not require a single drop of fuel for its operation. The dozens of oil distilleries and copra kilns that functioned everyday all over the colony used coconut husks as fuel. There was one Industry that used water power. That was the Cayole Coir Factory at Cascade where a large Water-Wheel was operated by water brought down from the mountain by an aqueduct. This enabled a small Pelton Wheel to develop 15 Horse power energy which created the mechanical motion in the small factory that produced ropes.

In 1908, there were five soap factories, five mineral water factories, one ice factory and a rum distillery in the Seychelles, and they all required some kind of imported fuel for their operation. The Blue Book Report for that year tells us that ‘16 packages of gas in flasks’ were imported, as well as kerosene oil.

In 1913, when the new Government House was completed, Governor Charles Richard Mackey O’Brien (1859-1923) had the luxury of a small petrol-driven automatic electric lighting plant which enabled him to indulge in his nocturnal lucubrations. The town of Victoria was lit by paraffin lamps.

In 1925 when the first cars appeared in the Streets of Mahé, 14,166 litres of motor spirit was imported. 103,425 litres of kerosene oil was imported. The following year, when on the 15th November of 1926 direct current electricity was supplied to houses in Victoria, 108,554 litres of kerosene oil arrived in the country. The contraption that supplied electricity daily from 6.00p.m to 6.00a.m was generated by a 30 kilowatt dynamo belt driven by a steam engine powered by a wood fuel boiler. How more fascinating can early twentieth century ingenuity be, indeed!

The steam engine and 30 kilowatt dynamo were purchased from the Norwegian Whaling company on Ste Anne Island which had ceased operations.

The population of the colony was 26, 835 inhabitants, many of whom began to do their cooking on stoves in kitchens rather than on firewood alfresco. 620 such stoves were imported in 1927. So as far back as then, firewood cut from logs was being replaced gradually by imported fuel, namely kerosene.

In 1928, as more households in Victoria hankered for the modern glow of electricity, the Power House at Huteau Lane purchased a 50 H.P diesel engine to replace the steam engine. A little later, a second diesel engine and a belt driven dynamo of 20 kilowatt were installed. The Power House then had a capacity of 50 kilowatts. (Almost 10 years later, in 1998, the electricity supply industry of PUC had a capacity of 37.5 MEGA watts). The demand for electricity kept on increasing that in consideration of this, by 1938, a 10 H.P diesel engine with a 50 kilowatt diesel generator was installed. There were then 300 electricity consumers on Mahé. By then, steam ships had been replaced by modern vessels and consequently coal had no export market.

The coal wharf remained a fuel depot whereas the ‘Coal Shed Island’ was occupied by The SHELL Company Petroleum warehouse. The British oil giant would be the colony’s sole fuel provider until 1985 when SEPEC took over (Nowadays, people still refer to the fuel station as ‘Shell’).

If, in the course of modern development and social progress fuel and economic prosperity are inseparable partners, in Seychelles this has been a powerful truth all the way up to the present time.

In 1938, when it was a foregone conclusion that the country’s fuel requirements and consumption would continue to increase, and that consequently more fuel would have to be imported, Governor Sir Arthur Grimble (1888 – 1956) enacted an ordinance to provide for the safe storage of Petroleum and explosives. SHELL soon installed a Petrol Station in Victoria and eventually as vehicular traffic augmented on the island, other stations were built at Anse Royal and Beau Vallon.

In 1994, after many years when paraffin stoves were used for our cooking, purposes, SEYPEC (The Seychelles Petroleum Company) introduced gas into our homes. Initially, there were disgruntled objections from the older generation but eventually, the safety and economical convenience of gas prevailed over the sentimentality of tradition.

We are a nation of almost 85 thousand inhabitants. We consume fuel in our work and leisure activities. Our social and economic welfare depends on it. We cannot even presume to gauge or measure our inexorable needs for fuel. The exigencies of our utter dependence on fuel surpass our mere concept of it.

Once upon a time the source of our fuel was our forests. Today it is a 750 cubic-sphere at the New Port. 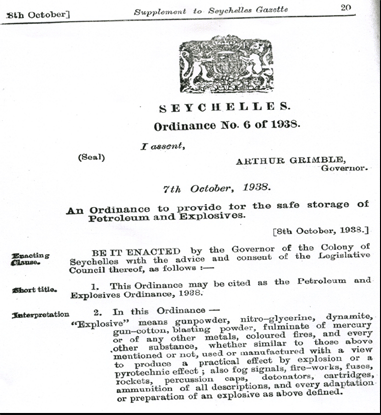