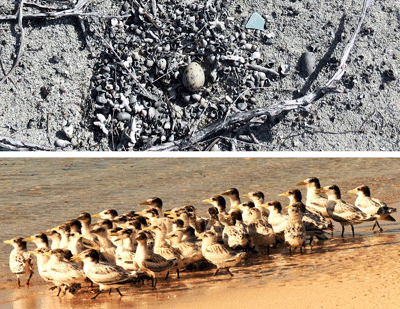 My last and only previous visit to Bancs Providence was in 1996. We landed near the southern point and saw a few Black-naped Terns (Dyanman Likou Nwanr). They behaved territorially but no nests were to be seen. In the all too short period ashore permitted by time and tide it was not possible to do an extensive search and the question remained hanging: Do Black-naped Tern breed on Bancs Providence or not?

The answer is significant because Seychelles is home to the entire known African population of this species. It is so rare that the BirdLife criteria for a site to be considered as an Important Bird Area are just one pair. It has been frustrating to wait two decades for the opportunity to answer the question, but now the time has come.

At first light on March 23, I departed Pangaea’s anchorage off Providence with Richard Schumann in command of our skiff and Marilize Nadauld, my expedition partner for the day. We called at Point Gustave, the southern tip of Providence and counted over 200 Crab Plovers (Kavalye), 100 Whimbrel (Korbizo) and most remarkable of all 400 Grey Herons (Floranten). Even at full speed it took the best part an hour to cross the shallow waters separating Providence from Bancs Providence, where Marilize and I disembarked at the northern tip of island number one.

We spent the day trekking south. We counted hundreds more Floranten, and an assortment of waders but no sign of the enigmatic Dyanman. We crossed three channels between the largest islands and searched other small islets but still there was no sign. We reached the last island and rested for lunch in the shade of a windswept bush, scrutinised by curious Fairy Terns who calmly if slightly begrudgingly accepted the two strange visitors to their sheltered nook. My rucksack was getting heavier so I decided to leave it under the watchful eyes of the Fairy Terns while we did the final island circuit. After all, with no sign of a single Dyanman I wasn’t going to need my camera. Wrong!

On the final island we found over 100 adult Crested Terns (Golan Sardin) standing guard over a crèche of more than 150 chicks not yet ready to fly. This was a new discovery and represents possibly the largest population of Golan Sardin on a single island in Seychelles.

The new findings did not end there. Just a short distance further on, we found them. Spread out along a sandy shoreline were 66 of the elusive Dyanman, more than I have ever seen together anywhere else. This number of birds meant there had to be a colony. Sure enough we soon located nests in open ground between bushes, some with eggs and some with chicks. There were perhaps as many as 50 pairs, which would make the colony the largest on a single island anywhere in the African region.

This is big news. I returned the next day armed with cameras to document the proof that Bancs Providence eminently qualifies for consideration as an Important Bird Area. But it is vulnerable to poachers including from Madagascar, a day’s sail to the south. Bancs Providence has possibly Seychelles’ largest colonies of two species of seabird, together with healthy populations of other birds and nesting turtles. It is a national asset and it deserves recognition and indeed protection as a Nature Reserve. 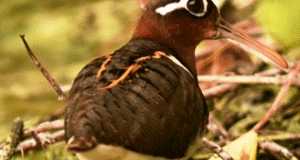