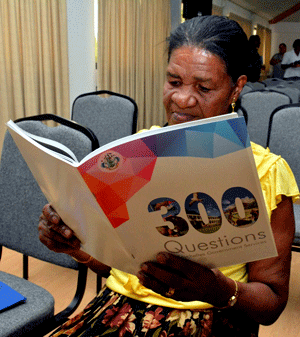 The publication, which is one of the results of the audit ordered by President James Michel after last December’s presidential election, was launched yesterday afternoon at the Seychelles Trading Company’s (STC) auditorium as part of activities to mark International Public Service Day which is this year being celebrated under the theme ‘A responsive public service serving the public’s needs’.

Present at the launch ceremony were Vice-President Danny Faure, government ministers, Speaker of the National Assembly Patrick Herminie, leader of the opposition in the National Assembly Franceska Monnaie, leader of government business Charles Decommarmond and other members of the Assembly, members of the diplomatic corps, civil servants coming from various ministries and departments, representatives of the civil society, senior citizens and youths.

On the part of President Michel and the government, he thanked every past and present civil servant for their work and contribution and to create what he described as “the foundation which makes that we are here today”.

The vice-president wanted guests present to note that the Seychelles’ public administration system has over the years evolved and modernised to as he said “do what it has to do”. He recalled that in 2009 the government reviewed the role of the state in terms of service by introducing government agencies which would implement decisions while defining policy, carrying research, monitoring and evaluating actions as well as international cooperation would remain the role of ministries.

He also stressed that citizens have to get answers for their questions, as policy execution is not always well interpreted by the persons charged of executing them. The challenge, he insisted, remains for public officers to reply to a citizen in an honest way and based on available resources.

Finally calling to “remove politics from the noble work that we are doing”, Mr Faure concluded that the book reflects another government transparency which along with the questions, provides a guide and answers to its citizens.

Chief secretary of the public service Jessie Esparon on her part commented that while people are looking up to a good and efficient public service which replies to their expectations, it is important to encourage the work of all government workers in order to push the country forward. 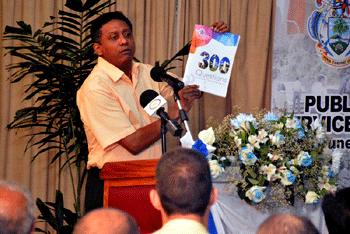 Noting that the private sector cannot provide certain services such as water and electricity or giving Seychelles a place in the international arena, she insisted that we must always remember that public servants contribute to improving the quality of life of the people.  This, she said, is not only through government service but by ensuring health, social, financial and other needs.

To meet those needs and improve quality of life, Mrs Esparon reminded that among other measures, government has introduced more community based services and simple survey systems to obtain feedback.

She concluded by calling on more young people to join the public sector.

The ceremony ended with the vice-president presenting copies of the book to representatives of organisations considered as key partners of the public sector.

While the work is currently being translated in Creole, the 300 questions are not the end, but just a foundation as more questions will be answered in its next edition.

Meanwhile, the one with the first 300 questions on Seychelles government services is on sale at Seychelles Nation’s sales office and Antigone book shop in Victoria.

The public is being encouraged to buy a copy and discover what poet Ras Pyek has in his own language described as the role of “the oil which lubricates the official engine”.

2016-06-24
Georges
Previous: Swallowed whole by the sea
Next: Nail extensions the new trend in Seychelles