Just as last year, seven records were bettered at the 40th annual Inter-School Athletics Championship on Saturday at Stad Linite.

Despite the weather being more than ideal for a record-setting day, many were expecting to see a similar record-breaking day as back in 2014 when 17 new records were improved, but it was not to be as only seven records were beaten this time.

All seven records set this year came in track events and the first to fall on the day was the girls’ under-8 60m mini hurdles.  Jamilah Volcère of Baie Lazare primary crossed the finish line in 11.60 seconds to erase the previous record time of 11.74 seconds set by Sophia-Anne Cedras of La Digue in 2014. 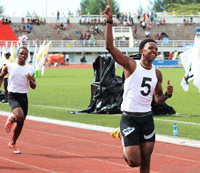 “I am very happy with the new record and I want to thank my physical education teacher and parents for helping me,” said Jamilah.

Anse Royale primary’s Anil Arisol was the second record breaker of the day with his time of 12.48 seconds in the boys’ under-8 80m sprint. His time was good enough to erase the 12.82 seconds performance held by Anse Royale’s Meshach Farabeau since 2014.

Anil had this to say to Sports Nation: “I am very happy and satisfied to have won my first gold medal and a new record and I want to thank my physical education teacher who made me train every day.”

Ned Azemia of the Seychelles Institute of Technology managed to beat his own record of 49.32 seconds set last year in the 400m boys’ open category as he stopped the clock at 48.46 seconds.

“I am satisfied as my time got a lot better and it is also a time that I can compete with the athletes at the world championship, which I will be going to soon,” said Azemia.

Anse Royale secondary’s Tessy Bristol also managed to improve her own record as she finished the girls’ under-16 200m sprint event in 26.19 seconds to better her previous time of 26.45 seconds set earlier this year in the heats.

“Well, I am very happy as I came here today with the aim of breaking the record and I managed it in the end,” said Bristol after collecting her medal for the event. 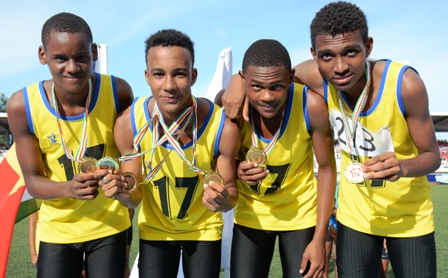 “I am a bit disappointed, as I was aiming to beat the electronic record of 2:01.80 and I did not manage it, but I am a bit relieved that I at least beat the manual record,” said Magnan.

There were two relay records set as well with the first coming in the girls’ under-16 4x100m relay. The Anse Royale team of Tessy Bristol, Jinny Dorby, Anisha Rabat and Maura Raoul beat their own record of 52.44 seconds set last year, with a new time of 51.96 seconds. Julie Adelhaq-Salih and Angelic Boniface were the reserves on the team.

“We are very happy as we were not expecting it, although we had come with the aim of beating this record,” said the girls from Anse Royale. 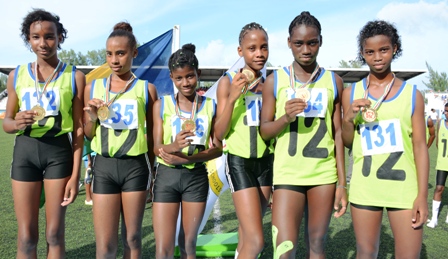 The other relay record was broken by the Belonie secondary school boys’ under 18 4x100m relay team of Shalim Denis, Alexandro Franchette, Juninho Mathiot and Gino Pleureuse.

The quartet finished the race in a time of 44.62 seconds to beat the 14-year-old record of 45.04 seconds held by English River secondary.

The Belonie boys were visibly very excited with their achievement. “We are very happy as we were expecting it, but we did not make a lot of fuss about it as we wanted to show what we can do rather than just talk,” said the boys.

The following are the results of the top three schools in each category: