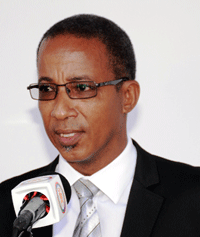 Situated at the Victoria Magistrate Court, the Fast Track court for environment and traffic offences will ensure that cases receive enhanced judicial attention they deserve and are timely dealt with within a stipulated timeframe.

Brassel Adeline is the Designated Magistrate of the Fast Track Court and he received his letter of appointment and certificate from acting Chief Justice Karunakaran during the ceremony.

Mr Karunakaran said Mr Adeline’s appointment will not only improve the efficiency, expertise, specialised knowledge in the relevant provision of law and their applications, but also ensure the consistency of appropriate sentences reflecting the sensitivity of the community.

The court, which has been described as an important milestone in the judicial system, forms part of the Seychelles judiciary’s initiative to minimise judicial delays and eliminate backlog of cases. It is also about the system’s ongoing innovative measures for case management where it is constantly improving its justice delivery.

“One area that requires our urgent attention is the timely disposal of cases involving offences which affect our environment and the safe use of our roads and transport. Concerns have been raised that such cases are not receiving adequate judicial attention and timely disposal in our courts,” said acting Chief Justice Karunakaran.

Elaborating on the raison d’être behind such a court, Mr Karunakaran said it is simply about justice delayed, justice denied. In cases involving environment and road traffic offences, he said, judicial delays not only deny justice to individuals, but also in the long run defeat the very purpose of the relevant legislations and deny justice to the entire community.

“Environment is our life, our future and our treasure. Likewise, road safety amidst an ever-growing number of vehicles on our roads is equally important to manage our day-to-day lives. They ought to be preserved and protected. That can be done through an effective and timely enforcement of the laws collectively, by all law enforcement agencies,” said Mr Karunakaran. 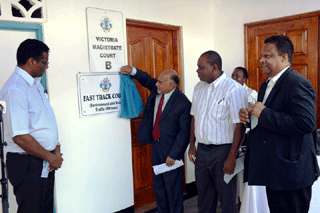 The acting chief justice explained that all cases filed under the Road Transport Act, Environment Protection Act, and Fixed Penalty Minor Offences Act will be registered in a separate register maintained for that purpose. The Fast Track court will hear matters ranging from fixed penalty, minor offences, to larger trials but falling within the jurisdiction of the Senior Magistrate Court.

All these cases will be assigned to the designated magistrate who shall preside the court with specific directions to ensure that priority is given to the disposal of these cases avoiding undue technical and procedural delays. The court will hear those matters on a daily basis, allowing them to be dealt with expeditiously under the careful eye of the designated magistrate.

Mr Karunakaran thanked Mr Adeline for his willingness to take on the task and said his office has already issued practice directions and has set out a timeframe for different stages of each case set in motion.

“We are confident that this will ensure that cases will be disposed of within six months from the date of filing, unless exceptional circumstances in a particular case warrant otherwise,” he said.

As for Mr Adeline he feels honoured by this appointment and believes this initiative will prove to members of the public that road traffic and environment offences are also important.

He was referring to past practices where emphasis was mainly put on serious types of criminal offense like felonies while public ones tended to be ignored.