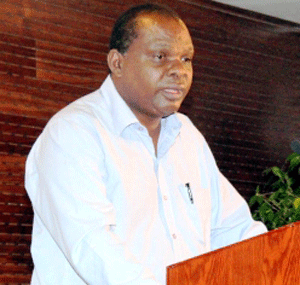 A series of technical and experts’ group meetings which will lead up to the 8th Conference of Parties to the Nairobi Convention got underway on Wednesday morning at the Savoy Resort and Spa at Beau Vallon.

Representatives from 10 countries including Seychelles, parties to the Convention, have converged here for these meetings – a series of four which are taking place throughout the week until the conference itself which will open on Tuesday next week.

The Minister for Environment, Energy and Climate Change Didier Dogley launched the meetings, the first of which was on the blue economy and ocean governance. It would be followed by a partnership, a policy and governance and a scoping meeting.

Addressing delegates Mr Dogley reminded them that the Convention is 30 years old this month and that these three decades signify hard work and progress in managing our regional marine resources.

“We should celebrate because despite the difficulties and challenges of providing for an expanding population , all countries of the region have shown tangible progress in their effort to sustainably manage this common regional space,” Minister Dogley pointed out.

The Nairobi Convention, which aims to protect, manage  and develop the marine and coastal environment of the Western Indian Ocean, came into force in 1985 but has since been revised and updated to incorporate the protocol on Protection of the Coastal and Marine Environment from Land.

It signed the amendments in 2010.
The Convention provides the broad framework for countries which are parties to it to take measures to prevent, reduce and combat pollution, reduce degradation of their marine and coastal territories.

In line with the Convention rotation principle, Seychelles through the Ministry of Environment, Energy and Climate Change has agreed to host the 8th Conference of Parties and its associated meetings.

The work programme of the Convention is carried out through a broad-based coordination structure which includes a network of focal points and thematic expert groups.
Flavien Joubert, the director general for Wildlife, Enforcement and Permits Division, is the focal point for the Convention.

Mr Joubert explained that the outcomes and recommendations from all the meetings will be submitted for debate and approval by the Convention next week.
“The different meetings are important to prepare measures to be adopted by the Convention,” Mr Joubert pointed out.

For his part Philippe Michaud, who chaired a component of the blue economy meeting, said Seychelles is seizing this great opportunity to share its experience, projects and programmes with regard to the blue economy.

“The Blue economy is still a new concept and there are many countries which are keen to learn more what we are doing and learn from us,” Mr Michaud said, noting that all the countries parties to the Convention are linked to the ocean and we need to work together because there are many things that we have to do together and these include sustainability of marine resources.

2015-06-19
Georges
Previous: Tourism trade formalises support to STA
Next: ‘We are moving on the road of constitutional advancement,’ says founding President