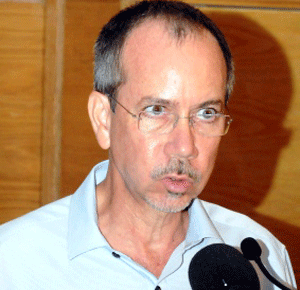 Some 40 people including managers from airport operations, aviation safety experts as well as representatives of key disaster management authorities are following a four-day training to strengthen the Seychelles International Airport’s capacity to handle logistical challenges in the aftermath of natural disasters.

The official opening of the training, which starts today, was held yesterday afternoon at the Eden Bleu Hotel on Eden Island.

An initiative of the Deutshe Post DHL Group, the world’s leading mail logistics group supported and funded by the United Nations Development Programme (UNDP) and the German government, the training aims to prepare airports in disaster-prone areas to handle the surge of incoming relief goods and traffic after disasters.

The training has been conducted at 33 airports around the world since it was developed in 2009.

Seychelles is the 34th country which is benefiting from the training.

It also enables the various organisations and aid agencies to better understand the processes at the airport in the aftermath of a disaster which will make easier relief efforts and enhance overall coordination.

It is expected that at the end of the training a comprehensive report to follow through leading to an action plan to better deal with the consequences of natural disasters will be drafted.

The Minister for Foreign Affairs and Transport Joel Morgan launched the training in the presence of the Minister for Environment, Energy and Climate Change Didier Dogley and other guests including airport and Seychelles Civil Aviation Authority (SCAA) staff.

The Get Airports Ready for Disaster (GARD) trainers who will be conducting the training are experienced experts from Deutsche Post DHL Group and are all volunteers. They provide relevant materials and training while the UNDP handles project management and coordinates activities with government agencies on site.

Chris Weeks, DHL director of humanitarian affairs who will be leading the training, shared with everyone present his first experience after the 2004 tsunami aftermath at Colombo International Airport.

“It was my first experience and I saw first-hand how the airport was inundated with relief personnel and goods and since then I have experienced 15 major disasters around the world where every time the airport is severely impacted when handling response from aid workers, search and rescue crews, incoming media, countless aircraft carrying relief freights…, I know what can happen to airports those few days after a natural disaster,” he pointed out, adding why it is  important to know how best to handle these.

In remarks to launch the training, Minister Morgan said: “Our airport is the gateway to the world , above and beyond Africa and the majority of tourists from all over the world come in through that one gateway either for leisure or business. But even in paradise we face the potential threats from nature, some of which are predictable while others occur without any warning,” Minister Morgan pointed out.

He noted that the remarkable increase in frequency of natural disasters around the world are due to climate change. And Seychelles in recent years has not been spared as it has seen an increase in disaster situations like the 2004 tsunami, annual heavy flooding, landslides and rock falls.

“In the face of such adversity, as a country we must provide immediate relief and to do so we must have in place plans to coordinate our efforts and facilitate delivery of relief to our citizens,” Minister Morgan said.

“The possibility of visitors in the country who may want to depart earlier which as a result would generate additional flight traffic, cannot be overlooked as well,” Minister Morgan stressed.

“The training will better prepare you to cope with such a surge by enabling you to come up with a plan of what to do when the time comes,” Minister Morgan added.

Patrick Hoareau, the general manager for airport management, said as a small country which depends heavily on tourism, Seychelles needs to ensure that it is well prepared in the event of a natural disaster.

“Our international airport is comparatively small when it comes to capacity, so it is therefore important that we maximise the use of our resources and facilities so that we can manage the surge and ensure continued acceptable level of service,” Mr Hoareau said.

He stressed that response to disaster requires a large number of stakeholders both within and outside of the airport thus the importance of the training which he said would enable key stakeholders to work together and formulate an appropriate response plan.

Roland Alcindor, the UNDP programme manager, noted that while airports have a quicker role in post disaster response and relief they are often adversely affected by disasters which can delay or prevent transport of badly needed life-saving supplies.

“Although it is difficult to eliminate the risks emanating from natural hazards, appropriate mitigations and preparedness measures and adequate response capacity could lead to minimising the impacts of such hazards,” he stressed.