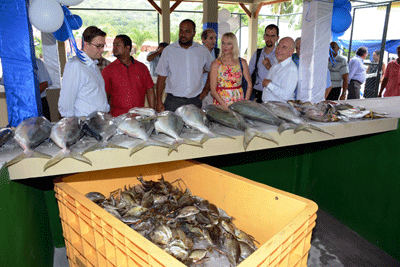 The Anse Royale district has a new fish and vegetable market.

Financed by the European Union (EU) and the Seychelles government at a cost of R2.2 million, the new facility which will benefit the Anse Royale and South Mahé communities was officially opened yesterday afternoon by the EU ambassador for Seychelles Marjaana Sall and the Minister for Fisheries and Agriculture Wallace Cosgrow.

Other EU ambassadors to Seychelles, the district’s member of the National Assembly (MNA) Dereck Samson, chairman of the SFA (Seychelles Fishing Authority) board Philip Michaud and fishermen and farmers were among other guests present.

In a short speech, Mrs Sall highlighted the importance of the sustainable fishing agreement between EU and Seychelles, which she said is one of Europe’s key areas of cooperation in the region.

The partnership, she added, moves beyond development aid up to trade and commerce, which she described as key to development and economic growth.

Ambassador Sall remarked that Seychelles has become a hub for tuna transshipment in the region, the industry thus creating job opportunities for Seychellois.

She also reminded that by means of other instruments, the EU is implementing programmes with the IOC (Indian Ocean Commission) and other foreign partners to permit what she called “the all inclusive development of Seychelles”.

Minister Cosgrow replied by being thankful to the EU for its continued support, expressing hope that the cooperation will continue.

He reiterated that every Seychellois heavily depends on sea resources which represent the country’s second most important economic sector for their livelihood.

Recalling that in our tradition fishing is considered as a hard job, he added that the government has recognised the hardship, as well as the value of fishermen. This is why, he said, with the support of foreign partners Seychelles has invested heavily in the fishing industry.

Among those partnerships, he added, is the one with the EU which provides support to fishermen with loans for purchase of boats and to other entrepreneurs for added value fish products. The cooperation, he further stated, has also benefitted infrastructure development such as the building of fishing ports, markets and storage facilities, with the aim of improving productivity and quality for the local as well as international markets.

The minister responsible for fisheries concluded by saying that the new Anse Royale market will improve fishermen’s as well as farmers’ conditions, the quality of fish and vegetables they sell, their overall quality of life and that of their clients and that it will also help beautify the district.

“You will no longer have to sell by the roadside,” he said, while he called on the community to take good care of the new facility and maintain a high hygienic standard.