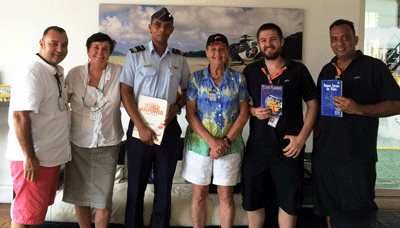 The 45th anniversary of aviation in Seychelles also included a silver lining for the Seychelles Air Force (SAF) when Aggie Robinson-Dent donated five crates of flight training manuals to them.

Aggie, who was the first flying instructor at the Seychelles Aero Club 41 years ago, in partnership with the late Mike Savy, is now retired and living in South Africa.

Lieutenant Wilven Jean, SAF pilot officer in charge of recruiting young students to train up to become pilots, welcomed the donation of books and said they will be put to good use.

The hand-over took place at the Zilair offices and was coordinated by the Zilair executive director Francis Savy and witnessed by his team – Gerhard Geyer (instructor) and Harry Samson (director of operations), as well as Aggie’s sister, Mia Dunford.