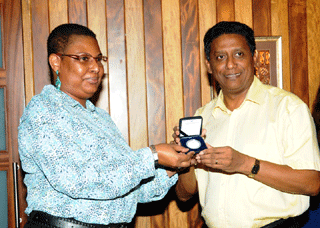 The Central Bank of Seychelles (CBS), in collaboration with the National Celebrations Committee and the help of the Ministry of Education, has launched a partly coloured commemorative coin with a face value of R50.

This is to commemorate the first year in which the country’s National Day is being celebrated on June 29, which is also our Independence Day.
The unveiling of the coin took place at the CBS headquarters in Victoria yesterday afternoon in the presence of the chairman of the National Celebrations Committee and Vice-President of the Republic Danny Faure, who was presented with the coin by the Governor of the Central Bank, Caroline Abel.

Also present were Mike Tirant, head of banking services division and officals of the bank and of the National Celebrations Committee. 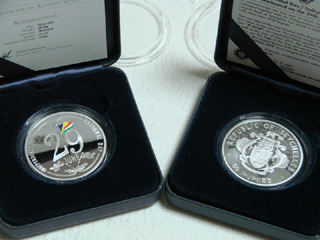 The coin, which has been produced by the Royal Mint of the United Kingdom, depicts the Coat of Arms of the Republic of Seychelles and the face value on the obverse. The date, ‘29 JUNE’, is given prominence on the reverse design along with the National Flag of the Third Republic in colour and the year of issue, 2015.

Also featured on the reverse of the coin are the flags of the First and Second Republic, all framed in a coco-de-mer shaped border with the words ‘INDEPENDENCE DAY’ and ‘NATIONAL DAY’ forming an integral part of the design.

The 38.61mm commemorative coin weighs 28.28g.
Feeling honoured to have got the privilege to unveil the commemorative coin, Ms Abel said CBS has worked very closely with the National Celebrations Committee to bring this coin to the public.

“June 29, 2015 will be a historical day and as such, the Central Bank of Seychelles is deeply honoured and pleased to have been able to contribute to the lasting and unique legacy attributed to this special occasion,” she said.

She also had special thanks to the staff of the CBS’ banking services who were involved in the realisation of this project.
Mr Tirant said the coin is limited to a maximum production of 2,500 pieces worldwide.  However, initially only 500 pieces will be produced and made available for sale at the CBS. The selling price of the coin is R1,000 per coin.

In addition, the bank will have a booth at the National Show this coming weekend to showcase the coin so members of the public can place their orders.