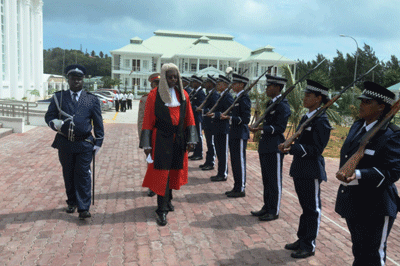 The ceremonial opening of the Supreme Court will henceforth take place in January instead of mid-September as has been the case over the years, Chief Justice Mathilda Twomey has announced.

As such the ceremonial opening of the Court will not occur on September 15 this year as previously planned and circulated. Instead it will be held on January 11, 2016.

CJ Twomey said it makes more sense to hold the ceremonial opening of the Supreme Court at the beginning of the first legal term of each year, being January 10, or the first working day thereafter if it falls on a public holiday.

“It makes logical sense to open the Courts at the beginning of the legal year, which is also the beginning of the calendar year. Before shifting the ceremony, I have sought the advice of the esteemed members of the Judiciary and Magistracy, the Attorney-General and representatives of the Bar Association of Seychelles and have their support in this regard,” said CJ Twomey in a letter to all media outlets and newspapers.

Despite the fact that the opening of Court has always been held on September 15, CJ Twomey said she is satisfied that the legal framework is logically consistent with a shift to January.

“The Seychelles Code of Civil Procedure (SCCP) read with the Supreme Court (Term) Rules of 1981, state that the first term of the Legal Year would be that commencing in January (section 4). With regard to altering a time-honoured tradition, I am aware that the ceremonial opening has always been held on September 15 in line with the English opening of Court. The tradition of the ceremony itself is something that is important in our legal community.

It gives us a chance to reflect on a year and to plan for the next one, to re-dedicate ourselves to pursuing justice and to express appreciation for the unsung heroes of the judiciary. I would not do away with that. However, holding the ceremony on September 15 is merely a tradition and the day itself has no special importance in the Seychelles calendar.

A decision to shift away from the European annual calendar has been taken in some other Commonwealth jurisdictions such as Australia, Singapore, Hong Kong and Lesotho, all of which still honour their history by having opening ceremonies. Incidentally all of these have shifted their ceremonial opening to January.

I am not suggesting that we do away with this important tradition, but rather that it is shifted to better reflect the annual cycle in Seychelles, the wording of the SCCP, and in this particular instance it will also ensure that I am able to attend the first opening since becoming Chief Justice and having settled into Office. I will have had an opportunity to engage with the stakeholders within the judiciary and will be able to outline my plans for the Judiciary starting from 2016,” writes CJ Twomey in her letter.

The third court term will begin on September 15 with business as usual.