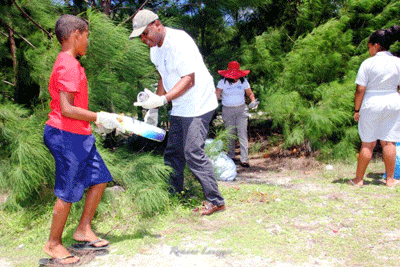 Cleaning and collecting rubbish in and around public areas, properties and homes as part of our involvement in the Clean Up the World campaign officially started at Baie Ste Anne on Praslin yesterday morning.

Pupils from the three state schools on the island had put together a number of performances all aimed at helping people to reflect seriously on the importance of good waste management.
In remarks before cleaning officially started Minister Dogley talked about the exceptional beauty of Praslin, and how that clean environment contributes to its economy, stressing on the responsibility of every Praslinois to ensure the island is always clean.

“The beauty of Praslin is the pride of every Praslinois,” said Minister Dogley who placed emphasis on the need for everyone to use bins properly.

Minister Dogley also stressed on the importance for our generation to hand over a clean and healthy planet to the next.

He said being an island which depends a lot on tourists and other visitors, it is important that we clean the beach after picnics. 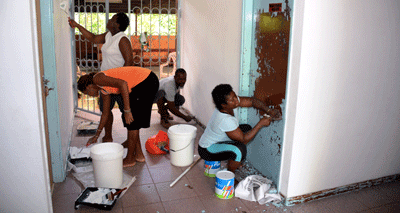 “Rubbish on the beach ends up in the sea, thus affecting our sea life which is important for our country and rubbish blocks drains and increases flooding,” Minister Dogley pointed out.
While pet bottles collection is more or less under control, Minister Dogley said the government is trying to see how take-away boxes can be managed properly by using more degradable materials.  Poor quality home appliances that end up at the dumping sites in just a few months are also a problem.

“We need to buy quality home appliances so that in a few months they don’t end up at the dump site,” Minister Dogley remarked.

Increased littering through car windows is also a nuisance which the minister said must stop.

“Money spent on cleaning keeps going up, but if we all take our responsibility this pattern can change, and that money can be used on other things such as education and housing,” Minister Dogley said urging everyone to seriously reflect on their actions and to do something now to help our environment.

He urged the children present to pass on the education at home, to correct their parents and friends and other people in their communities when they wrongly dispose of their rubbish.

Meanwhile, clean-up activities on Mahe also started yesterday where different groups were mobilised in all districts to clean public areas, business compounds, rivers, beaches to name but some.

Yesterday morning a group of volunteers at Plaisance cleaned in and around the district administration office as well as the surrounding compound of the Home for the Elderly.

Plaisance district administrator Claudette Louise said it is important to keep a clean environment and that we should not wait for the Clean Up the World campaign to do so.
Clean-up activities will continue throughout the weekend in all districts including on Praslin and La Digue.

2015-09-19
Georges
Previous: Farmers get better understanding of budget allocation to agri sector
Next: Tourism Ministers from Mozambique and the Seychelles meet on the sidelines of the UNWTO General Assembly in Colombia