Contact Group on Piracy off the Coast of Somalia (CGPCS) 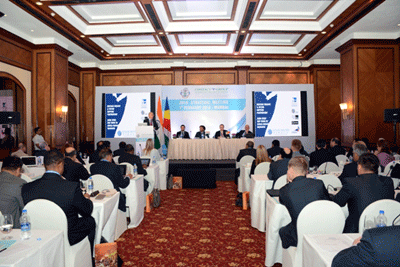 Under the chairmanship of Seychelles, the Contact Group on Piracy off the Coast of Somalia (CGPCS) has concluded its first strategy meeting of the group.

The meeting, chaired by the Seychelles Minister for Foreign Affairs and Transport Joel Morgan, was held on February 1, 2016 and hosted by the government of India’s Ministry of Shipping in Mumbai.

The meeting was held under the chair’s theme ‘From the Region to the Region. Creating a lasting legacy’, which was elaborated by Minister Morgan as he gave his opening speech.

Welcoming over 70 delegates from various nations and private entities, the minister thanked the director general of the Ministry of Shipping of India, Deepak Shetty, for his support and presence and for the support of his minister in hosting the event.

“We are gathered here this day in Mumbai, India, fulfilling in part the aspirations of the Contact Group membership who wanted and as expressed at the 18th Plenary Session in New York City in the United States on 8th July 2015, to add to the region by empowering further the region.  This would be done in part by further engaging regional leadership within the contact group. We are pleased therefore that Seychelles was selected and supported by the membership to assume the chairmanship for the year 2016.  On behalf of the Seychelles government and the people of the Seychelles we thank you all for your trust and confidence,” said Minister Morgan.

At that meeting in 2015, held at the UN headquarters, members agreed that the European Union as chair would hand over both the chairmanship and the secretariat to the Seychelles following the end of its mandate, supporting an idea to empower further the Indian Ocean region.

The one-day strategy session saw the various working groups talking about the work done to date and the priorities for the coming year.

Chairing the various working groups presenting their updates were the UK, Seychelles, Italy, COI, Japan, the UAE, Portugal and Mauritius.

Presentations were also made by Oceans Beyond Piracy on hostages and the process in place to support them and gain their freedom; the Combined Maritime Forces on the latest risk assessments to date as regards piracy; BIMCO discussing the move to reduce the High Risk Area and next steps according to the trade; and the Indian Ocean Commission presenting the progress to date of the MASE programme, a maritime security effort for the Indian Ocean funded by the European Union.

Delegates at the strategy meeting agreed that the threats that brought about piracy were still present, risking a resurgence or an increase of activities and possibly successful attempts by pirate groups.

It was as well understood that although there had been no successful attacks against IMO registered vessels, smaller unregistered fishing vessels were nevertheless being attacked and a few of them taken over by suspected pirates with deaths of some of the crew members or of pirates during those assaults.

Delegates agreed to move forward on their respective action plans and as well agreed when proposed by Minister Morgan that the 19th plenary session of the group should be held in the Seychelles from May 31, 2016, for a period of four days.

Delegates attending past plenary sessions have numbered in excess of 300 members, representing nations, military organisations, the trade and other private organisations.

The UN mandate for the contact group was extended for another year, this by the UN Security Council sitting on November 10, 2015, being resolution 2446.

It is expected that the mandate of the group will be reviewed this year in November as well as during Seychelles’ chairmanship.

Present as observers at the strategy meeting were the secretary general of the Indian Ocean Commission, Jean Claude de l‘Estrac and Captain Prashant, the senior advisor of the Prime Minister of the Federal Republic of Somalia.