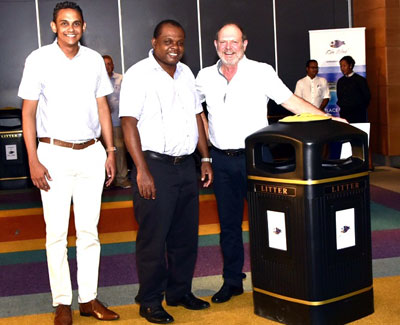 Eden Island has donated 100 litter bins to the government of Seychelles.

The bins, sponsored by Eden Island and Eden Bleu Hotel, were handed over to the to the Minister for Environment, Energy and Climate Change Didier Dogley by Craig Heeger, executive chairman of Eden Island Development Company.

This follows similar donations of 40 litter bins made by Eden Island in 2006 and a further 60 bins in 2009. Many can be seen on the sidewalks of Victoria.

Mr Heeger further announced that Eden Island and Eden Bleu Hotel will donate 100,000 bin liners for insertion in the dustbins, equating to a three-year supply for each of the 200 bins donated.

Mr Heeger also reported that the Eden Island Village Management Association, which manages the residential estate on Eden Island, is already implementing its own waste collection efficiency strategies and is investigating and implementing ways to separate refuse for re-cycling.

Minister Dogley in his address thanked Mr Heeger and the Eden Island community for their donation and for their support of the Sustainable Seychelles and cleaner and greener Seychelles campaigns.

The minister also stated that the ministry is discussing ways of dispatching some of the bins to Praslin as well.

He emphasised that changing the mentality towards littering is an ongoing process and he was very much looking forward to seeing the people of Seychelles make good use of the donation.