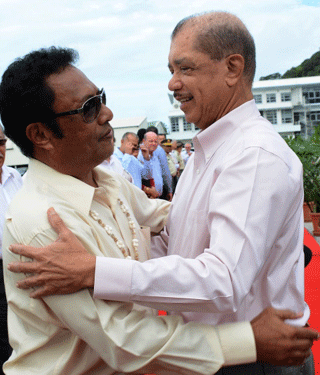 Palau President Tommy Remengesau Jr left yesterday afternoon on board a commercial Etihad Airways flight and present at the Seychelles International Airport to bid him farewell was President James Michel, Vice-President Danny Faure, ministers and other high governmental officials, among other guests. 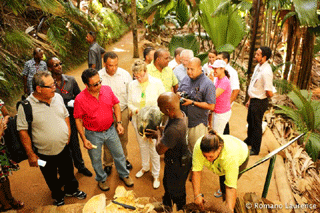 The Palau President had the opportunity to see both the male and female coco-de-mer trees and a staff at the Vallée de Mai demonstrated the de-husking of a giant coco-de-mer nut. 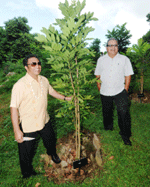 On Monday, President Remengesau planted a coco-de-mer seed at the arboretum of the National Biodiversity Centre at Barbarons and also visited the Alley of Small Island Developing States and took a photo next to a tree dedicated to his country.

President Remengesau was in Seychelles as guest of honour for the National Day celebrated for the first time on June 29, which is also Seychelles’ Independence Day. 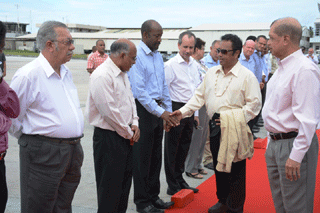 Seychelles and Palau only established formal diplomatic ties earlier this year, although President Michel and President Remengesau have enjoyed close relations for a number of years.

They were the ones who called for the setting up of the Global Island Partnership (Glispa) in January 2005 during the second International Meeting of the Small Island Developing States held in the neighbouring Indian Ocean island of Mauritius.

Glispa is an open and voluntary platform for all islands and their supporters to work together to build resilient and sustainable island communities through innovative partnerships.

Both Palau and Seychelles are also members of the Alliance of Small Island States (Aosis).

On Tuesday, the relationship between Seychelles and Palau reached new heights with the signing at State House of two agreements on general cooperation and short stay visa waiver.

Foreign Affairs and Transport Minister Joël Morgan signed on the part of Seychelles and Hersey Kyota, ambassador of Palau to the United States, signed for his country in the presence of President Michel and President Remengesau.