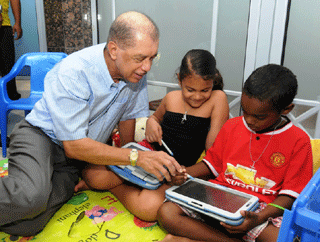 The progress and innovations taking place on the inner islands were showcased in a home and industry fair held over the weekend at Grand Anse on Praslin.
Held under the theme ‘Zil Pros An Mouvman’, the fair has been described by President James Michel as “an evolution through history of the different phases of life here on Praslin and La Digue, whereby you can see how things were before and how they have developed over the years”.

Exhibitions like the Seychelles Postal Services’ old stamps and services to modern ones; the traditional attendance register used in Praslin secondary school to the new Biometric Time and Attendance system; new asphalt machine from the Seychelles Land Transport agency (SLTA); manual handling of bus tickets to the latest electronic ticketing machine with WIFI and GPS facilities to track buses; modern fibre optic services to enhance the 4G network and internet protocol television services by telecommunications companies and even the progress made at crèche level which was being exhibited by the young kids of Baie Ste Anne creche and primary school were some of the innovations and progress shown to the public in the three-day fair. 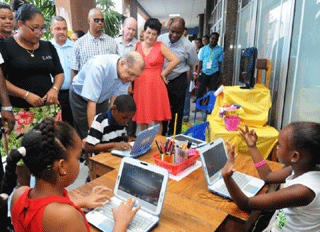 The environment also featured prominently in the exhibitions — from stalls with endemic trees to be used to fight soil erosion from Praslin mountains to Sustainability Seychelles’ biodegradable take-away boxes made of 100% sugar cane fibre.

The impressive miniature Vallée de Mai installed at the entrance of the main fair on Grand Anse Praslin playing field with educational materials and Seychelles Islands Foundation personnel explaining how to properly use that world heritage site were also among the highlights of the fair.

Members of the public could also obtain educational materials on the hairy caterpillar as well as view displays of electric cars being promoted by e car Seychelles.
The home and industry fair was one of the main activities to mark Constitution Day organised by the National Celebrations Committee in collaboration with the inner islands. La Digue was also included in the event. 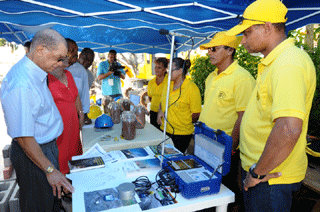 Besides President Michel, who visited all the stalls and interacted with the exhibitors, also present at the opening of the fair were the Minister for Investment, Entrepreneurship Development and Business Innovation Michael Benstrong (who officially launched the event); Minister for Tourism and Culture Alain St Ange; Minister for Health Mitcy Larue and the Minister for Finance, Trade and the Blue Economy Jean-Paul Adam.

Principal secretaries, chef executives, members of the National Assembly, district administrators from Praslin and La Digue, other senior officials and people of Praslin were also present.

“What I have seen today showcases many aspects; it’s an evolution through history of the different phases of life here on Praslin and La Digue, whereby you can see how things were before and how they have developed over the years. It shows also 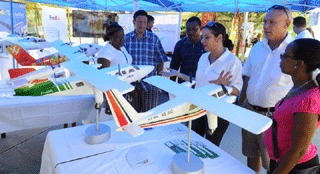 our vision for the future. For me it has not only been an exhibition from our history and educational past but also an opportunity where Praslinois and Diguois have been able to show their achievements, what they are doing and where they want to reach in the future. This shows their knowledge in entrepreneurship and also highlights their talents in arts and craft,” said the President in an interview with the local media.

During the tour of the exhibition, the President said he noted with pleasure that a lot of young people have launched, or preparing to launch themselves into small to medium sized businesses.
President Michel encouraged them to keep on learning from their parents as well as others around them, so that they can be more innovative, develop their talents and succeed in their respective businesses. 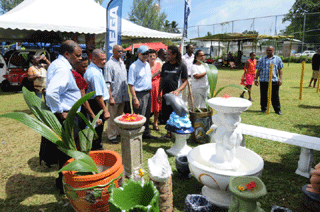 “The government should give more attention to those two islands and facilitate their interests in entrepreneurship, especially the youths. On La Digue, we had a plan some years ago to put in place an artisanal village; I believe we need to speed up and implement that plan. For Praslin, we had a lot of projects in developing the artisanal sectors. The government should emphasise its efforts in developing entrepreneurship, not only in artisanal but in other sectors as well,” said President Michel.

“Another important thing that I have seen through this exhibition is its environmental aspects. More than ever, more efforts are being shown by different organisations on Praslin in collaboration with people on Mahé, in sensitising our people on the necessity to protect our natural heritage sites, such as Fond Boffay and Vallée de Mai which are unique,” he added. 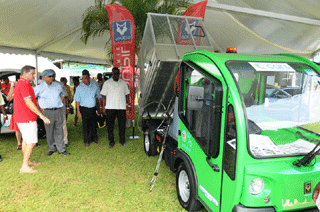 The president also emphasised the need for sustainable development in relation to the environment, where he said that the population should be sensitised more on how to protect and manage the environment, not those people who are in business.

In his speech to launch the fair, Minister Benstrong said we are continuously seeing the development of small businesses on Praslin and La Digue especially in the tourism industry and those associated with it. Therefore the theme ‘Zil Pros An Mouvman’ has been rightly chosen as it depicts the capacity of our Seychellois  on these two islands.

“Small and medium businesses is the motor that assures and guarantees employment and riches of our people.

“Therefore the government will continue to play the role of facilitator by providing the proper and the right legislative framework and bring forward policies to foster a more conducive business environment,” said Minister Benstrong.

The accompanying photographs taken by our photographer Patrick Joubert show highlights of the fair.