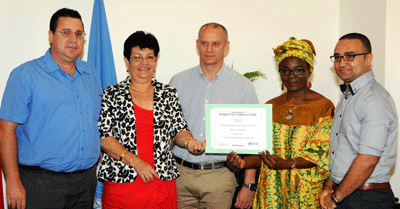 The World Health Organisation (WHO) has recognised the effort made by the Ministry of Finance, Trade and the Blue economy in the fight against tobacco consumption.

The recognition has come in the form of the 2015 World No Tobacco Day Award attributed to the ministry, for what the WHO has described as “an outstanding contribution for tobacco control”.

The organisation decided to recognise the finance ministry’s contribution on the occasion of World No Tobacco Day on May 31 this year, primarily for the latter’s decision to increase taxes on tobacco importation and cigarette production.

It is to be noted that through the award, which was initiated in 1998, each year the WHO shows appreciation to individuals or institutions that have carried out outstanding initiatives towards tobacco control around the world.

Twenty nine organisations have been rewarded this year. 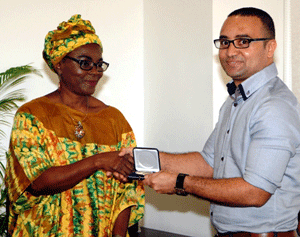 The principal secretary for finance and trade, Patrick Payet, yesterday accepted the certificate and medal provided by the WHO director general Dr Margaret Chan and which represents the award, from the hands of the WHO representative in Seychelles Dr Cornelia Atsyor.

This was during a short ceremony at the ministry’s headquarters on Independence Avenue, in the presence of the Minister for Finance, Trade and the Blue Economy Jean-Paul Adam and the Minister for Health Mitcy Larue. Also present were the former Minister for Finance and now chief executive (CEO) of State Assurance Corporation of Seychelles (Sacos) Pierre Laporte, other finance and health officials, and members of the National Tobacco Control Board.

Dr Atsyor reminded that with six million deaths annually as a result of the use of tobacco and related products, smoking is one of the major risk factors for ill health and deaths in the world.

Referring to Seychelles’ policy to increase tax on tobacco products, she pointed out that this was “a tried and tested strategy for tobacco demand reduction”.

“Taxation has been found to be one of the best strategies for demand reduction. Higher taxes discourage those contemplating smoking not to start in the first place, while encouraging those who smoke to quit smoking. It has been found that this intervention has led to health care gains against non-communicable diseases such as lung cancer and strokes,” she revealed.

While Dr Atsyor remarked that Seychelles’ good practice has been recognised by the WHO, she insisted that actions that promote good health are not the responsibility of the Ministry of Health alone and that other sectors have their roles to play so that health goals are attained.

She asked that the award presentation serves as an occasion to encourage all the sectors to work together.

Mr Payet replied that it was an honour for the Ministry of Finance to receive such an award on behalf of the government and also an honour to take part in tobacco control.

He assured that the ministry will continue to play its role by working in close collaboration with the Ministry of Health and by continuing to develop initiatives which will help reduce or eliminate tobacco consumption in Seychelles.

The Ministry of Health is meanwhile calling on all smokers to make an effort to quit smoking.

Those needing help are being encouraged to contact the Cardiovascular Unit at the Seychelles Hospital.

2015-09-11
Georges
Previous: Sadcopac members get chance to visit the island
Next: How the humble coconut is making a huge comeback in Seychelles