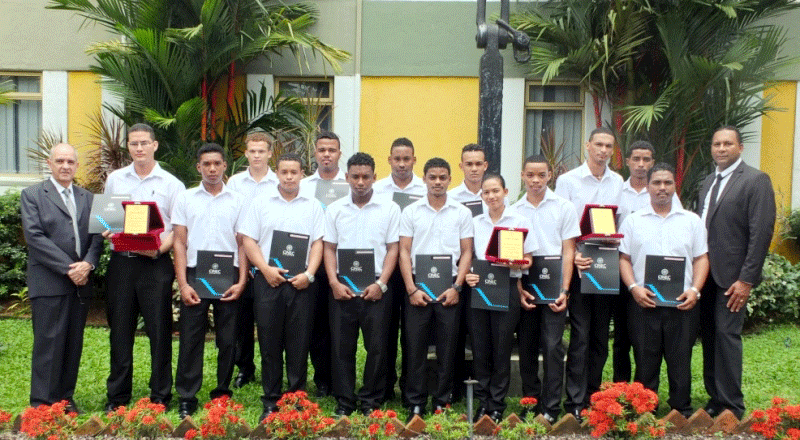 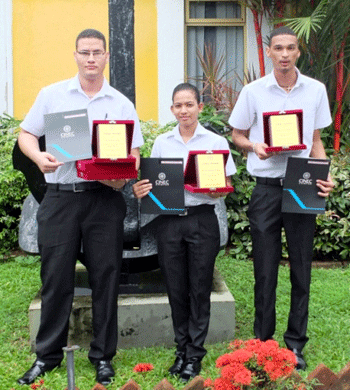 This is the second cohort of the Seychelles Petroleum Company Limited Seypec trainees who have successfully completed their four months of training (from May 12 to September 11, 2015).

Representing Seypec at the ceremony held at the Cinec campus in Sri Lanka, was the chief executive of Seypec Conrad Benoiton and Allain Asba, the company’s crew manager along with the Cinec faculty members, students and other guests.

All 14 trainees were presented with their certificates including three of the students who have recorded outstanding performances: Adrian Naidoo received Best Student for Seamanship and Excellence in Engineering awards;  Excellence in  Navigation was awarded to Jean-Luc Hoareau and Best Student Engine work shop was received by Samia Esparon who were presented with special awards. Adrian Naidoo also received the award for best all round student.

During their time at Cinec the students underwent a preparatory course that covers both navigation and engineering topics aimed at equipping them with overall knowledge of the undertakings on board a vessel.

Upon completion of the four-month training, the 14 trainees will proceed for a minimum of 6-9 months sea time on board Seypec tankers. They will leave mid-November 2015.

The 14 trainees are expected back in Seychelles today on board Sri Lankan National Airline Mihin Lanka.

Before leaving earlier this week to attend the graduation ceremony Mr Benoiton said different components of the training of many of the 125 Seychellois employed on the fleet of tankers have been provided by Seypec over the years.  Mr Benoiton added that since last year Seypec in collaboration with Cinec has come up with the specially tailored pre-sea course to give the newly graduated MTC students it started to take in enough knowledge on different aspects and components of the work that await them when they board a tanker.

“The whole idea behind the programme is to gradually replace foreign nationalities by Seychellois in positions below the ranks of officer,” Mr Benoiton said, adding that the graduation is confirmed proof that the programme is working.

“Their performance has indicated that they have enough practical skills and we are satisfied and ready to invest in some of them for officer training in fields like engineering and navigation,” Mr Benoiton said.