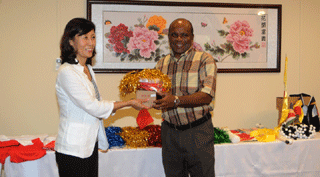 Chinese gifts to add colour and gaiety to youth display

The 500 schoolchildren who will be taking part in the majorette display as part of the National/Independence Day celebrations on June 29 at Stad Linite have received their outfits from the Chinese embassy.

The colourful red and white outfits complete with black shoes, the different coloured pompoms and twirling batons they would use for the display, were handed over yesterday by the Chinese ambassador to Seychelles Yin Lixian to Alain Volcère, a member of the National Celebrations Committee.
The ceremony took place in the mayor’s office on State House Avenue yesterday morning. 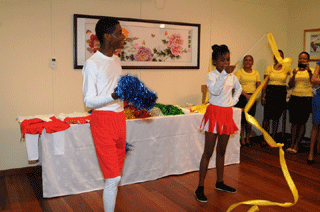 “It is always a pleasure to be able to receive help from friends as so much work and  effort is being put into the preparations for the forthcoming national events and the donations will no doubt help to make the display more colourful and spectacular,” Mr Volcère said.

Ambassador Yin for her part extended her government’s joy and pride to share in our achievements.
The donations also included a batch of small flags to be distributed to members of the public on that day as well as colourful decoration bulbs to add color to street decorations.

Francesca Cadeau and Gerald Payet, two children from English River school who will be taking part in the display, dressed up in the outfits and gave guests present a small demonstration of what they are preparing for that day.