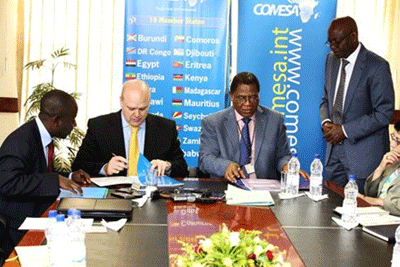 The head of the European delegation to Zambia and special representative to Comesa, Ambassador Alessandro Mariani and Comesa secretary general Sindiso Ngwenya, signed the agreement in Lusaka, Zambia.

The funds are part of an overall kitty of €1.3 billion provided by the EU under the 11th Eurpean Development Fund (EDF) Regional Indicative programme (RIP) for the EA-SA-IO region signed in June 2015 for the period 2014 – 2020.

Secretary General Sindiso Ngwenya thanked the EU for its continued support to the economic integration of the EA-SA-IO region and in particular the Comesa sub-region.

“It is not an understatement that without the support of the EU the achievements made by Comesa in regional integration would have been less than optimal.

“Comesa already has a framework to ensure that we deliver time bound results and demonstrate value for money for this facility,” Mr Ngwenya said.

Ambassador Mariani said the TCF will be instrumental in supporting the design of new regional programmes to be funded by the EU in the Eastern Africa, Southern Africa and Indian Ocean (EA-SA-IO) regions.

“Among others it will provide technical support for studies, sector surveys, stakeholders’ consultations, communication and monitoring activities in various development areas such as trade integration, migration, maritime security and wildlife conservation.

“The TCF will also support policy dialogue between Comesa and the EU, as well as coordination among the regional organisations in this region of Africa,” he said.