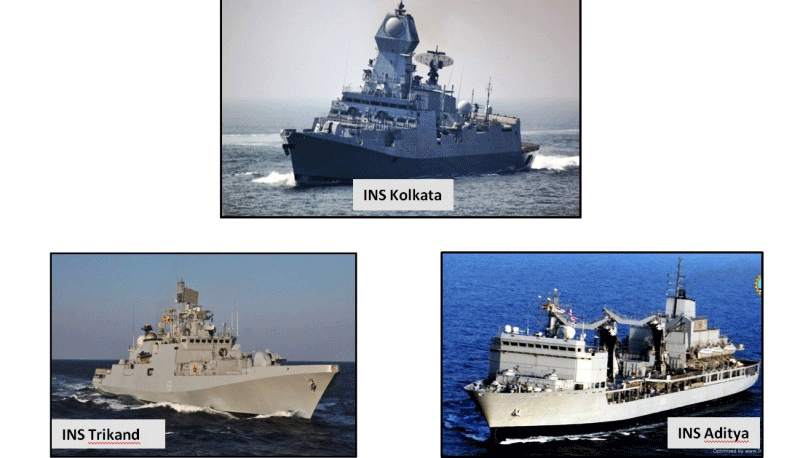 Three frontline warships of the Western Fleet of the Indian Navy will be visiting Seychelles from today until Sunday as part of an overseas deployment.

The ships – INS Kolkata, INS Trikand and INS Aditya – are under the command of Rear Admiral Ravneet Singh, Flag Officer Commanding Western Fleet, who is embarked onboard INS Kolkata, the largest destroyer of the Indian Navy.

INS Kolkata was commissioned on August 16, 2014 and is fitted with most advanced weapons and systems onboard.

The ship is on her maiden overseas deployment in the Indian Ocean region.

During the port call in Victoria, Rear Admiral Ravneet Singh and accompanying commanding officers from the Indian Navy will call on Vice-President Danny Faure and Minister for Foreign Affairs and Transport Joel Morgan, besides meeting deputy Chief of Defence Forces Colonel Clifford Roseline and other senior officers of the Seychelles People’s Defence Forces (SPDF).

While in Seychelles the ships’ officers and crew members will be taking part in social and charitable activities.

After leaving Port Victoria on Sunday, the ships are scheduled to take part in a joint training exercise at sea with the Seychelles Coast Guard.

The deployment of the Indian Navy ships adds yet another chapter to the strong defence and maritime cooperation between India and Seychelles.

The Indian Navy has been undertaking biannual deployment towards surveillance of Seychelles EEZ in joint operations with Seychelles Coast Guard for the past few years in pursuance of a defence cooperation agreement between the two countries.

The present visit of the Indian Navy ships is part of its two-month long deployment in the Southern Indian Ocean in keeping with the government of India’s vision of SAGAR (Security and Growth for All in the Region).

Rear Admiral Ravneet Singh is a naval aviator and has commanded various ships as well as naval air squadrons during his illustrious career. He also served as a defence adviser to Kenya, Tanzania and Seychelles from 2005-2008 during which he was closely associated with the various capacity building projects for the SPDF.

While in Seychelles, the ships will be docked at Port Victoria and will be open to visitors on Saturday August 27 from 10am to 6pm. All are cordially invited.