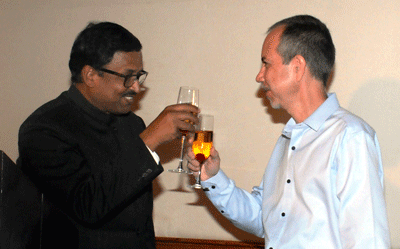 Indians and Seychellois join in celebrations

Several ministers, high government officials, members of the judiciary and of the diplomatic corps among other guests on Monday evening joined Indian diplomats, nationals doing business, living and working in Seychelles in celebrations to mark India’s 70th Independence Day anniversary.

This was at a special gala evening at the Kempinski Resort at Baie Lazare.

This was followed by addresses from Mr Panda and Foreign Affairs and Transport Minister Joel Morgan respectively following which both dignitaries raised toasts to the good health of both countries’ leaders, prosperity, progress , well-being and friendship of our two peoples.

Addressing guests at the event Minister Morgan said Seychelles is proud to have India as one of its key development partners.

“Ever since the establishment of our diplomatic relations in 1976, the Indo-Seychelles relationship has grown from strength to strength,” Minister Morgan said.

“The world’s largest democracy and one of its smallest have together demonstrated  how we have successfully collaborated across numerous fields and have created a lasting partnership which can serve as a model for other nations to follow,” he added.

Minister Morgan went on to highlight the different sectors which have benefitted from Indian expertise and these include defence where Seychelles has benefitted  with a new high speed interceptor patrol boat, a Dornier aircraft, a coastal radar system as well as other military equipment.

“Maritime security is a domain where India is playing a key role and has developed a solid partnership with Seychelles,” Minister Morgan added.

“Maritime assets from India’s modern naval fleet are regularly deployed to our region to ensure surveillance against any threats that may exist,” Minister Morgan pointed out.

In the field of human resource capacity-building, numerous scholarships have been offered through the Indian ITEC programme.

“Our shared vision to see our peoples at the centre of development underpins our bilateral ties,” Minister Morgan went on to stress.

He went on to explain why Seychelles holds the partnership it enjoys with India in the highest esteem.

“Through the  grants and credit facilities received from India, the Seychellois people are the ultimate beneficiaries of India’s generosity,” he pointed out.

High commissioner Panda noted that a grant amounting to US $8 million has been earmarked for release this year for supply of essential medicines and medical equipment to the Seychelles Hospital.

“Out of this, over US $5 million has been released so far incuding an emergency supply of medicines that was airlifted by a special Indian Airforce  aircraft in February this year,” Mr Panda said.

He noted that in support of the government’s drug rehabilitation programme, a consignment of 45,000 Naltrexone tablets is expected to be delivered shortly.

Mr Panda went on to highlight other areas that India is helping Seychelles  notably in providing public transport Tata buses to the SPTC, vehicles, equipment and other supplies for the police force, IT equipment and stationery to schools, installation of solar panels for homes, among others.

Mr Panda did not miss to commend the Seychelles government ongoing effort to promote unity in diversity through cultural exchanges and activities namely India Day and International Day of Yoga.

Mr Panda described the India-Seychelles relationship and partnership as exemplary.