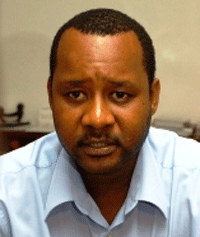 The Office of the President made the announcement yesterday and said the appointment takes effect today, September 15, 2015

Mr Baker holds a Bachelor’s degree in Law & Business from the University of Lincoln in the UK.

He has a professional background in labour relations. From 2005 to 2009, he served as the corporate services manager of the Seychelles Ports Authority. In October 2009 he was appointed the director general for Labour Relations and Employment Promotion, a post which he held until 2012 when he proceeded on overseas training. Following the completion of his degree studies earlier this year, he served as a technical advisor in the Ministry of Labour and Human Resource Development.

2015-09-15
Georges
Previous: Press Meetings in Brazil gave the visiting Tourism Minister from the Seychelles the greatest visibility he could have ever hoped for
Next: Melvin Jones Fellowship – 19 Lions honoured