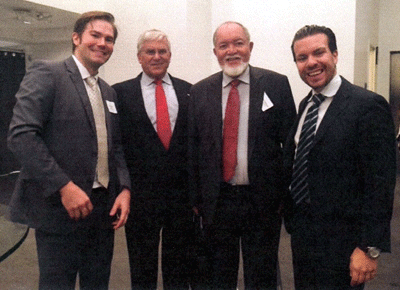 As the people of Seychelles become more and more entangled within a competitive pre-Presidential Election climate, the nation’s founding President Sir James R. Mancham is making sure that the Seychelles external exposure is maintained at the highest possible level.

Following President James Michel’s appearance at the United Nations (UN) and his involvement at the Clinton Foundation and his plea to world leaders to take the climate change issue and his Blue Economy concept more seriously, founding President Mancham announced yesterday, that he will make sure that the momentum created concerning the Republic of Seychelles is maintained and promoted.

Only a few days ago, the former President wrote to US President Barack Obama calling on him to rectify the existing anomaly in Seychelles-US diplomatic relations by the reopening of the US embassy in the country which was closed down after the Cold War.

Sir James had earlier been in New York taking part in a panel discussions at the New York Institute of Technology with distinguished celebrities like Vicente Fox (former President of Mexico); José Figuerres (former President of Costa Rica); General George W. Casey Jr. (former Chief of Staff of US Army (retired); Bill Bennett (former US Secretary of Education and others, on the ‘Future of Education’ – when he called on world leaders to tread carefully in the sphere of inventing more and more robots.

“Machines were invented to be of service of men. But we are now more and more becoming slaves of machines,” Sir James stated.

While in New York, Sir James also took part in a seminar on ‘Cultural Diplomacy’, organised by the Berlin-based Institute for Cultural Diplomacy (ICD). At this summit, he expounded on his peace of mind philosophy and called on the UN to pay more attention to the concept of human contentment, as opposed to mere economic progress in the context of global governance.

During his visit to New York Sir James also had a working lunch with Sven-Olof Lindblad and his mother Sonia. Sven’s father, Lars Eric Lindblad, renowned as the father of global eco-tourism, brought the Lindblad Explorer to Seychelles long before the opening of our international airport. Sonia herself resided in Seychelles for many years as a representative of Lindblad Travels.

Sir James’ discussions with the Lindblads were not only of a nostalgic nature but also focused on the possibility of the Lindblads basing a premium cruiseship in Mahé for inter-island cruising. Sven’s company, Special Expedition, has over recent years operated in partnership with National Geographic and operates premium cruises to different parts of the world. Earlier this year, one of the cruiseships, The National Geographic Orion, operated a cruise in Seychelles waters.

This weekend, Sir James announced that he is once more on the move. He will be leaving Seychelles on Wednesday this week for Washington DC on the way to Savannah, Georgia, to take part in the Ocean Exchange Summit. Each year, the Ocean Exchange seeks innovative, proactive and globally scalable solutions with working prototypes and applications that can cross industries, economies and cultures. Twenty-four experts from around the world reviewed and selected the top 10 solutions with the greatest ability to transform industries.

From USA, founding President Mancham will be heading to Belgrade, Serbia, to deliver a keynote address at the 11th International Conference of the European Centre for Peace Development (ECPD), which this year is being held under the theme ‘Future of the World between Globalisation and Regionalisation’. Other keynote speakers at this conference will be HE Professor Federico Mayor (former director general of Unesco and HE Erhard Busek (special coordinator of the Stability Pact for South-Eastern Europe). 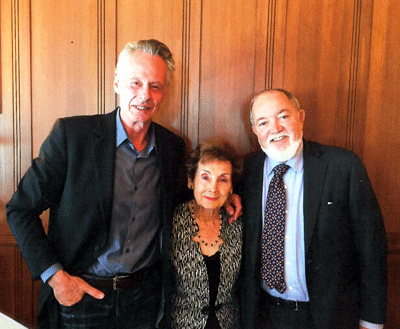 During the course of this conference, the ECPD will launch a Serbian edition of Sir James’s last book ‘SEYCHELLES – The saga of a small nation navigating the cross-currents of a big world’, as a tribute and recognition of the organisation’s appreciation of Sir James’s contribution to world peace and of his endeavours to “dry up the water of hate which swim between Serbia and Kosovo at this time”.

From Serbia, Sir James will head for Madrid to attend the ‘Global Policy Dialogue on Preventing and Countering Violent Extremism’, which is a two-day conference organised by Le Club de Madrid (CdM) to mobilise policy-makers opinion formers, civil society and grassroots organisations around the concept of preventing and countering radicalisation and violent extremism.

Ten years ago, on the first anniversary of the Madrid train attacks, Le Club de Madrid convened a unique International Summit on Democracy Terrorism and Security, bringing together more than 1,000 world leaders and experts to analyse the causes of terrorism and find better, more sustainable ways of how it can be confronted.

The result was the Madrid Agenda – a document which had a profound impact on the global debate, giving rise to a new consensus while destroying the illusion that the political and social divisions that produce – and provide justification for – terrorism can be resolved through military means alone.

The present initiative aims to channel the collective wisdom, ideas, experience and political will of policy-makers and opinion formers from all over the world to produce an authoritative Global Consensus on how to confront radicalisation and violent extremism wherever it happens. The added value of this initiative is to bring the political experience of Le Club de Madrid members (who are all experienced democratically-elected former Presidents and Prime Ministers) who have dealt with these challenges during their time in office and can therefore provide a needed political dimension to the proposals and ideas of experts and practitioners.

Sir James is earmarked to take part in several other important international conferences during the month of November which include the World Ocean Council Summit on ‘Sustainable Development of Ocean Industries’ in Singapore; the Chief Justices of the World Conference in Lucknow, India; the World Future Council Conference in Hamburg, Germany under the theme ‘Giving a voice to the voices’; the China-Africa Forum in Beijing, China, and the Gusi Peace Prize Award Event in Manila, Philippines, where he has been invited to deliver the opening address.

However, following the news that a Presidential Election is imminent in Seychelles, Sir James who had accepted the invitation of the secretary general of the Parliamentary Association of the Black Sea Economic Corporation (PABSEC), and the Centrist Asia Pacific Democrats International (CAPDI), to form part of a six-member delegation to observe the Parliamentary Election in Azerbaijan in November, has informed PABSEC and CAPDI, that he will not be able to do so.

“It will certainly not be well seen that I am in Baku to observe the Azerbaijan’s Parliamentary Election when I should be in Seychelles to observe the Presidential Election,” Sir James said.