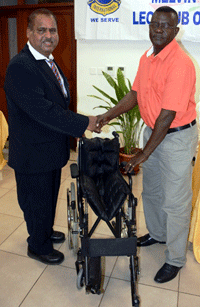 Nineteen Lions Club members have been bestowed with the Melvin Jones Fellow shield, in honour of the club’s founder Melvin Jones.

This took place on Saturday evening during a gala dinner at the Espace Building organised by the three Lions clubs in Seychelles – the Leo Club, the Melvin Jones Club and the Lions Club.

The event was attended by Vice-President Danny Faure, the president of Lions Club Seychelles Dr Valentina Seth, vice-chairperson Ramu Pillay, among other guests.

The shields were presented by VP Faure and Lions senior member Mr Singh.

Lions Clubs world-wide recognise outstanding individuals by bestowing on them the Melvin Jones Fellowship Award, which is the highest form of recognition and embodies humanitarian ideas consistent with the nature and purpose of Lionism.  The recipient of this award becomes a model of exemplary service to his club and the community which it serves.

Speaking at the event Lions Club member Dr Selvan said it was a very special occasion as Seychelles is the first country in the world which has registered three clubs together forming the Lions fraternity – Lions Club, Melvin Jones Club and Leo Club.

He noted that these three clubs merging together is very important for a small country like Seychelles.

He pointed out that the Lions fraternity is a voluntary service which finds its own resources, which each member giving their time, energy and money with full dedication to give back to the community. 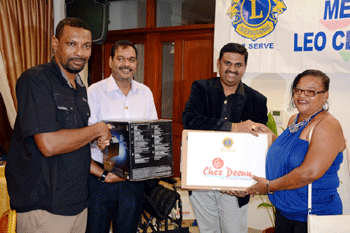 During the gala dinner the Lions Club also handed over a computer and printer to La Rosière primary school sponsored by Chez Deenu and Pillay R. Group as well as a wheelchair to the Youth Hostel at Anse Royale sponsored by Siva Pillay of Ponnkyl Trading.

Thanking the Lions Club and the sponsors for the computer and printer, the head teacher of La Rosière school, Beryl Botsoie, said the equipment will benefit both the pupils and teachers.

Accepting the wheelchair, the manager of the Youth Hostel, Roger Alphonse, said it is a useful piece of equipment that will benefit one person at the hostel.

It was also revealed during the gala evening that the club raised R74,920 during a sponsored walk it organised and which has been described as “a huge success”.

The money will be used to fund the club’s activities.

D.V Sharma, who was rewarded for being the person who collected the biggest amount of money from the sponsored walk, has thanked all sponsors for supporting this noble cause.