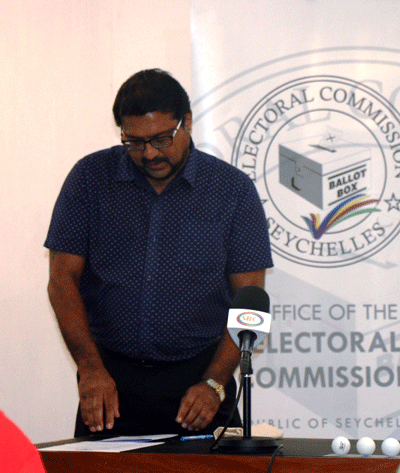 Draw for PPBs and order of names on ballot paper held

Political parties and independent candidates taking part in next month’s National Assembly election now know the order they will appear on the ballot paper and in which they will make their political broadcast.

A draw to decide that order took place last night at the Electoral Commission’s headquarters at the National Library in Victoria.

With regard to the order of candidates on the ballot paper, those representing Parti Lepep will be first (on top), followed by those for the Seychelles Patriotic Movement (SPM), Lafors Sosyal Demokratik (LSD), Linyon Demokratik Seselwa (LDS), and finally independent candidates where appropriate.

As for the order of political broadcasts for political parties (opening) the first party to present its programme is Linyon Demokratik Seselwa (LDS), followed by Seychelles Patriotic Movement (SPM), Parti Lepep and Lafors Sosyal Demokratik (LSD). 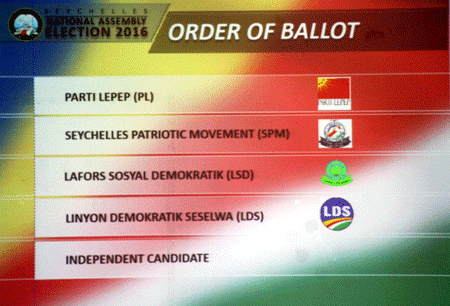 Before the draw, the commission presented certificates and voters’ register to the members of the parties and independent candidates who took part in the nomination earlier.

The official campaigning and putting up of billboards by participating political parties and candidates started as soon as the draws were done.

He noted there were no issues with the first two political parties to register – Parti Lepep and LDS ‒ whose documents were in order.

As for the two other parties – LSD and SPM – some issues had to be settled.

“Unfortunately some of their (LSD and SPM) documents were not really in order. We gave them a certain amount of time to rectify taking into consideration that they were already present for nomination. We were tolerant in granting them time to put things in place. They responded quite well, they were cooperative and sorted out their documents,” said Mr Athanasius.

He said after verification and ensuring all were according to regulations, the commission issued them with a certificate.

Regarding the court order where the LSD name is being contested, Mr Athanasius said until then no court order had been received by the commission.

Mr Athanasius also said all candidates who have received the certificate of validation could start their campaigning as from last night. But there are certain regulations they have to adhere to such as sizes of the posters, locations of billboards, among others.

“We have held meeting with all stakeholders concerned like liaison officers of political parties, independent candidates and Seychelles Land Transport Agency (SLTA) regarding locations of billboards, their sizes, etc.,” said Mr Athanasius.