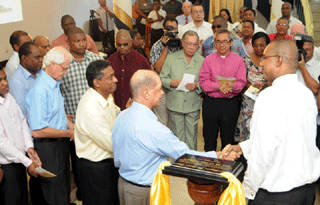 A parliamentary museum situated on the 1st floor lobby of the National Assembly building at Ile du Port was officially opened on Wednesday afternoon to coincide with the first Constitution Day celebrated yesterday.

The treasures of the museum comprise the People’s Assembly of 1987, the 1st, 2nd and 3rd legislature, portraits of speakers, chairpersons and long serving members of our parliaments, providing a glimpse into the different styles of legislature over time and the role of the main presiding officers, photographs, articles on parliamentary events. There is also a collection of fascinating gift items presented to the Assembly by visiting dignitaries.

President James Michel, Vice-President Danny Faure, the president of the Court of Appeal Francis MacGregor, also a long serving parliamentarian and speaker of the Assembly, ministers, past and present parliamentarians among other distinguished guests were present on the ground floor lobby to witness the occasion.
President Michel and Speaker Herminie unveiled the plaque to open the museum.

The clerk of the National assembly Shelda Commettant, said work over the last few months focused on “transforming the House of the People into a museum showcasing the history of Seychelles legislature as well as the evolution of parliamentary democracy in our country”.

“We have captured some of the most significant moments we hope to preserve for many years to come,” Ms Commettant said.

In order to realise the project, Ms Commettant said the assembly has received help from the National Celebrations Committee and the National Constitution Day Committee, the Australian embassy and parliament as well as the Assembly’s senior research officer Tania Isaac who spent two weeks at the Australian parliament museum to learn from their expertise. 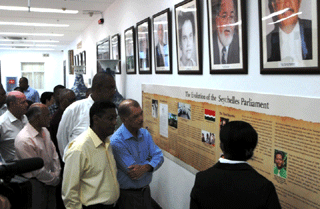 Speaker Herminie noted that “it is only fitting as we celebrate our first Constitution Day to take some time to relive the many occasions and remember the many great souls who have influenced our destiny as a nation”.

Speaker Herminie said the museum seeks to showcase the evolution of parliamentary democracy in our short history.
“It is a bold attempt to encompass the multitude of events, the personalities, the ideals, the challenges and the achievements associated with the rich, historical legislative activities of Seychelles,” Speaker Herminie said.

He stressed that the content of the museum is telling the story of our struggle for legislative representation, our fight for independence, about the one party era and the return of multiparty 22 years ago.

“The museum will enable us to experience history,” Speaker Herminie added.
Guests also had the opportunity to view a short video which relived important moments in the evolution of our parliament.
President Michel, Vice-President Faure and all the guests present were led on a tour of the museum following its opening.