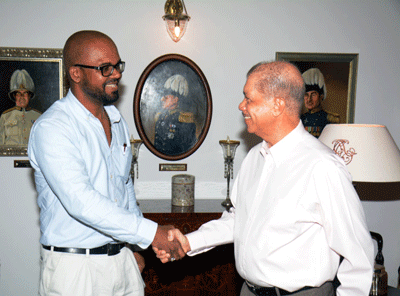 The chairman of the Seychelles Chamber of Commerce and Industry (SCCI), Wilson Nancy, yesterday morning paid a courtesy call on President James Michel at State House.

The meeting followed Mr Nancy’s fresh election to the post where he has replaced Marco Francis who has decided to give more attention to his business. Mr Francis accompanied his successor to State House yesterday, along with SCCI secretary general Juliette Sicobo.

President Michel and Mr Nancy discussed the current business environment, the way local enterprises are operating as well as their relations with government. The businessman, who is involved in the construction, agriculture, and textile sectors, also stressed on the role of the SCCI as an independent organisation and its need to remain impartial.

“We represent the business community and should not be influenced by government,” he wished to ensure.

Replying to critics who claim that his chairmanship is being contested due to what is claimed as lack of involvement in the election where many businesses voted by proxy, prompting some of them to threaten pulling out of the SCCI, Mr Nancy counterattacked by saying that thirty to forty other businesses have contacted him, asking to join the organisation.

He claims to have been “credibly elected”, with all procedures duly followed as per the organisation’s regulations, with 21 days notice given to members prior to the election.

On his plans for the creation of a more profitable business environment, the new SCCI chairman said his priorities will focus on innovation with the creation of more “made in Seychelles” products; a better business structure with the right legislations and the proper implementation of the thirteenth month salary programme.

He insists that payment of an extra month at the end of the year should not affect businesses.