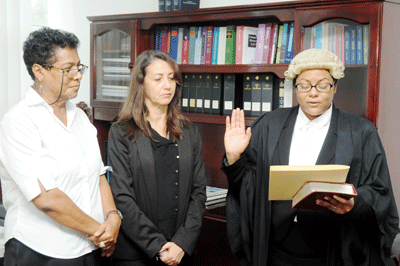 New state counsel Amanda Faure has taken her oath to serve the republic in the office of state counsel and her oath of allegiance to preserve, protect and defend the Constitution of Seychelles.

Ms Faure took her oaths before the Chief Justice of the Supreme Court Mathilda Twomey earlier this week.

Present for the auspicious occasion were her parents and the Attorney General Rony Govinden.

Ms Faure, who studied for her law degree at the University of Seychelles and for her Bar also locally over the past four years, has been working at the office of the Attorney General since March this year.

“It has been a very challenging time for me but I enjoyed every moment of my studies,” a delighted Ms Faure said after she had been officially welcomed to the legal profession by CJ Twomey.
“I am really looking forward to put my skills into practice in court,” Ms Faure added.

Meanwhile the judiciary has announced the appointment of George Emmanuel Robert as a Magistrate.

Mr Robert studied in Australia and was called to the Bar in Australia where he practiced at the beginning of his career.

A statement from the judiciary said that Mr Robert has proven himself to be hardworking and high achieving. He will be the fourth Seychellois magistrate joining the small and dedicated team of five magistrates in the Magistrate Court based in Victoria.