‘No glitches at Bank of Ceylon branch in Seychelles’ 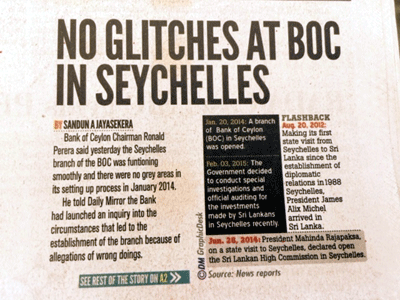 Bank of Ceylon (BOC) chairman Ronald Perera has said the Seychelles branch of the BOC is functioning smoothly and there are no grey areas in its setting up process in January 2014.

He told the Daily Mirror newspaper in Sri Lanka that the BOC had launched an inquiry into the circumstances that led to the establishment of the Seychelles branch because of allegations of wrong doings.

“We inquired into allegations that the BOC branch in Seychelles was established in haste and with ulterior motives. The inquiry report has found nothing irregular and we are fully satisfied with the setting up process and the management of the branch,” Mr Perera said.

He said there was no question of closing or any threat of bankruptcy at the branch.
The then Finance Minister Ravi Karunanayake ordered an inquiry to find out if Sri Lankans had deposited ill-gotten funds at the branch in Seychelles, which is considered a tax haven. 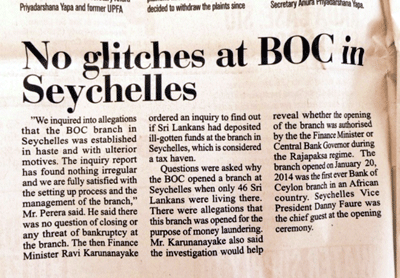 Questions were asked why the BOC opened a branch at Seychelles when only 46 Sri Lankans were living there. There were allegations that this branch was opened for the purpose of money laundering.

Mr Karunanayake also said the investigation would help reveal whether the opening of the branch was authorised by the finance minister or Central Bank governor during the Rajapaksa regime.

The branch, which opened on January 20, 2014, was the first ever BOC branch in an African country. Seychelles’ Vice-President Danny Faure was the chief guest at the opening ceremony.