On the sidelines of the UN General Assembly 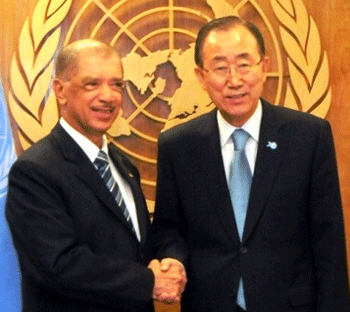 President James Michel met the secretary general of the United Nations, Ban Ki-moon, on the margins of the organisation’s General Assembly on Tuesday.

President Michel spoke with the secretary general with regards to the state of affairs governing the world and mapped out his vision for the continued relevance of the UN organisation in a rapidly changing world.

Mr Michel remarked that Seychelles very much believe in the principles of the UN charter which remain relevant even as the United Nations commemorates its 70th anniversary. He said he is confident that Mr Ban Ki-moon would steer the UN through another year of progressive dialogue and give overall guidance.

In view of the 70th anniversary of the organisation, President Michel urged that the international community renews the spirit of the Charter, and more importantly reinvigorate it in light of the trend of our times and the needs of the modern world.

Seychelles has been at the forefront in advocating solutions to problems faced by small island developing states (Sids). As such, President Michel expressed his gratitude to the secretary general for his support in that endeavour.

President Michel added that climate change has become the foremost security challenge for Sids. Although the Sids community continues to be one of the smallest contributors to global emissions, small islands are the most vulnerable to the adverse effects of the phenomenon.

Mr Ban Ki-moon shared President Michel’s hope that a binding agreement on climate change would emerge from the Paris Conference at the end of this year.

President Michel also expressed his desire that the global community unites in the effort to reduce greenhouse gas emissions. In addition, he called on all developed countries to fulfill their commitments for the mobilisation of $100 billion annually by 2020 for the operationalisation of the Green Climate Fund (GCF).

President Michel briefed the secretary general on the Blue Economy which Seychelles is spearheading to protect its greatest natural resources – the ocean – and derive benefit from it for its people.

On his part Mr Ban Ki-moon spoke about the 2030 Agenda for Sustainable Development and hoped that concrete actions would be taken in order to achieve its primary objectives.

He expressed his desire that in the year 2030 when stock is taken, the world can safely assert that all points within the Agenda were adequately satisfied.