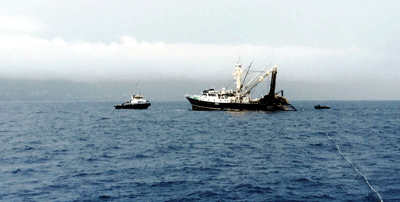 Owners of South Korean purse seiner Oriental Kim and sailors are talking to officials of the Seychelles Maritime Safety Administration in order to determine how and why the fishing vessel ran aground at L’Ilot, Glacis at around 3am on Wednesday.

The Oriental Kim was re-floated just before 5pm on Thursday and speaking to Seychelles NATION, Seychelles Ports Authority (SPA) chief executive, Colonel Andre Ciseau said this was a result of hard work and great planning.

With the help of other SPA partners and stakeholders, Colonel Ciseau headed the salvage operation carried out to save the South Korean tuna fishing vessel which had inexplicably hit the rocks at L’Ilot, Glacis.

“I am very satisfied with the way all those involved worked together to get Oriental Kim to float again,” said Colonel Ciseau.

The Oriental Kim was heading towards Port Victoria when the incident occurred and a major salvage operation involving different agencies, such as the Seychelles Coast Guards, the Department of Risk and Disaster Management, and the department of environment among many others was immediately launched. All the agencies worked to contain the small oil spill to avoid a negative impact on the environment.

It took the Seychelles Ports Authority, Seychelles Coastguards and the Seychelles Maritime and Safety Administration (SMSA) three attempts to successfully re-float and drag the Oriental Kim out to sea.

“We were at L’Ilot at 4pm and the job was done by two tugs and a skiff,” said the director general of the SMSA, Captain Joachim Valmont Valmont.

Colonel Ciseau expressed satisfaction that the salvage mission was finally successful, a fact he attributed to the SPA’s seeking advice and working in close juncture with its partners.

“The fact that we have been able to re-float Oriental Kim with no additional damages is the result of good coordination and planning,” he added.

The SPA handed the Oriental Kim back to its owners at 5pm on evening and they will now take the necessary steps to sort out their insurance and other legal issues.

Colonel Ciseau has extended congratulations to all those who took part in the salvage mission, saying that their understanding, patience and cooperation are the reasons they have succeeded in accomplishing the challenging task.

“We have managed to avoid a potential catastrophe that could have had a negative impact not only on the environment, but also on the tourism sector, that of fisheries and in the long run on the Seychelles economy,” concluded Colonel Ciseau.

The Oriental Kim was carrying 25 crew members including one Seychellois. It was carrying around 700 tonnes of tuna.