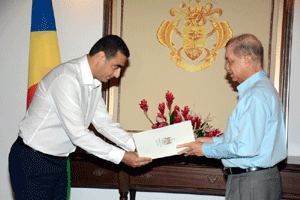 The Palestinian State is grateful to the support shown by Seychelles in its cause.

This was the feeling expressed by the new ambassador of Palestine to Seychelles, Hazem M. Shabat, as he presented his credentials to President James Michel at State House yesterday morning.

Speaking to the press after meeting President Michel and Vice-President Danny Faure, Mr Shabat revealed that he had conveyed to them the gratitude and appreciation of President Mahmoud Abbas and the Palestinian people for the position Seychelles has always had in favour of his country’s fight for sovereignty.

“We are recognised by Seychelles and with the help of Seychelles we have achieved a lot on the international arena as an observer nation of the United Nations and a member of Unesco. Seychelles’ support cannot be taken for granted. It will forever remain in the diplomatic heritage of both countries,” he said.

Speaking on the ongoing conflict between his country and Israel, Mr Shabat commented that “we do not expect the occupier to recognise the occupied”.

In spite of the Israeli occupation however, the Palestinian ambassador feels that his country remains “a very strong state”.

The ambassador highlighted that his country boasts a lot of expertise in different fields and has consequently made of human capacity its main natural resource. In this respect, he wishes closer cooperation between Palestine and Seychelles.

Ambassador Shabat, who is based in Dar-es Salaam, will be also meeting the Speaker of the National Assembly Dr Patrick Herminie before he leaves the country.