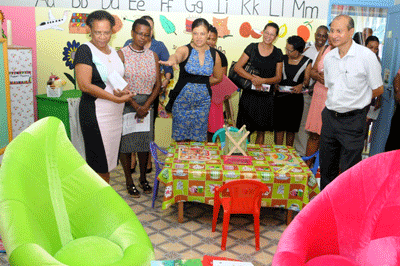 The opening of the new centres formed part of activities to mark Children’s Day yesterday.

Learning centres are areas where pupils learn about specific subjects through play and activities as playing is an active form of learning that involves the whole self, even cognitive development.

There are four centres; reading centre, mathematics centre, home centre and the sand and water centre.

These facilities have been partly funded under the 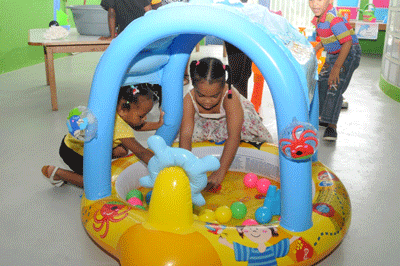 national Early Childhood Care and Education (ECCE) trust fund and from contributions made by parents.

The ribbon cutting to officially open the centres was done by principal secretary (PS) for early childhood, primary and secondary education Merida Delcy and chairman of ECCE Lambert Woodcock.

During the ceremony the Minister for Labour and Human Resource Development Idith Alexander handed over to two crèche pupils, Raphael Changking and Rihannie Rath, the keys to the model house used in the carnival float earlier this year by Perseverance. This little house 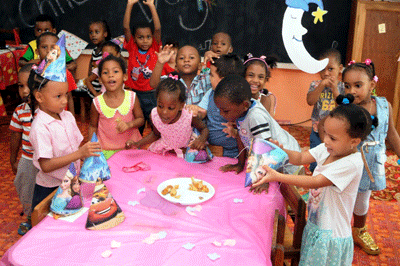 will be used by the children to play in.

Addressing those present, the head teacher of Perseverance North primary school, Bernadette Maria, said it is important for pupils to learn through play and they will surely find learning more enjoyable and have no fear for failure as they will be engaged in real life activities.

“We strongly believe that the creation of the centres will enable the pupils to develop positive attitude towards their learning,” she said. 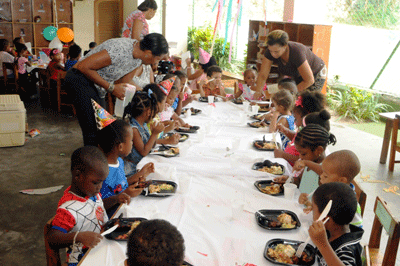 development areas as outlined by the Seychelles early learning framework.

At Mont Fleuri primary, a class spent their day at the swimming pool at Roche Caïman, another class enjoyed their lunch at a hotel while others organised class parties. 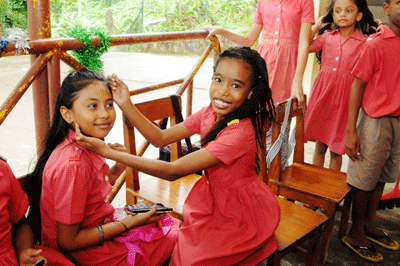 All the activities were organised by the children’s parents and class committees.

Nine-year-old Angela was dolling up her friends’ face with make-up to make her look beautiful for Children’s Day.

She said she was having fun with her friends.

“I’m happy to celebrate our special day and I would like to thank all the teachers and parents who helped contribute to make all of it happen,” she said.

Five-year-old Ioana from La Rosière crèche was happy to have been able to wear her Princess Elsa dress which her mom bought her for her birthday.

For her, the best part is the cake then the dancing.

Takamaka primary students spent their day at Paradis des Enfants where they took part in various games and activities. This was after they attended mass in the St Mary Magdalene Church in their district.