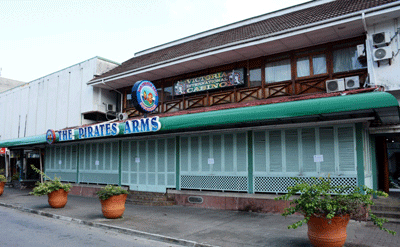 The Seychelles Pension Fund (SPF) is about to embark on a project to redevelop the Pirates Arms Building as announced a few years ago.

After a series of consultations with various stakeholders, the final plans have been submitted to the Planning Authority, the SPF said in a communiqué yesterday. “The decision to redevelop the Pirates Arms building was taken several years ago on account of the age of the building and the need for continuous repair that was becoming untenable and very costly. It was thus decided that a redevelopment was the only way forward and Cabinet approved the concept in 2014,” says the communiqué.

The redevelopment is estimated to cost R450 million and will include ground floor for shops and restaurants plus four floors for offices and other business ventures, with a multi-storey car park at the back of the building.

Demolition work will start at the beginning of March and it is anticipated that the construction of the new building will start around August 2016. It is expected to take three years to complete.

According to the SPF communiqué all tenants of the Pirates Arms were informed of the intention to redevelop the premises in 2012. In November 2014 all tenants were given until November 2015 to vacate the premises. This was later extended to February 29, 2016 based on requests from the tenants who noted that November was too close to the festive season.

The SPF says that priority will be given to the current tenants when tendered out upon completion of the building.

2016-02-10
Georges
Previous: Firm supports two kids in need of special care
Next: All set for ex-Royal Fleet Auxiliary members to get compensation