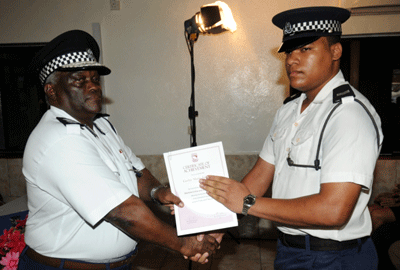 Among the police’s greatest achievements last year was a reduction in crime rate.

Members of the force were also empowered through various training courses and donations of equipment which all contributed towards a successful year.

These were revealed during the Seychelles Police’s annual end of year gathering held on December 30 at the International Conference Centre.

The event was held under the patronage of the Minister for Home Affairs Charles Bastienne, Commissioner of Police Ernest Quatre, assistant commissioners and other high officials in the force.

Retracing the achievements of the force during the year 2015, assistant commissioner for policing, Reginald Elizabeth, highlighted the impressive reduction in crime rate.

Mr Elizabeth said the police recorded a decrease of 21% in crime rate from June to November that year.

Burglary saw a similar pattern to reactive crimes. In November last year only 18 cases of burglary were reported as compared to 194 in April of that same year.

Another similar pattern was in theft where from June to November there was again a great decrease compared to January to May.

In the offence against person category like assault, domestic violence, Mr Elizabeth remarked as from May, the force started to see a decrease in assault against person.

Talking about the police’s approach which resulted in these positive outcomes, Mr Elizabeth mentioned crime prevention and crime detection strategies implemented during 2015.

“First of all the police structure was revised and adopted. A new policing model was implemented. Personnel and resources were re-distributed to stations. Effective services were decentralised. All police vehicles were branded to embrace more police visibility and to minimise abuse of police vehicles. Response time to calls for police assistance improved drastically by implementing monitoring mechanisms resulting in more than 80 percent in call outs being attended to within a targeted time frame of less than 10 minutes.

“The list of wanted persons dropped from one to five to less than 10 due to apprehension of wanted persons. Over 600 arrests were made over 2015. A new foot and bicycle patrol system was implemented in addition to vehicle patrols. Tourism police were decentralised and placed under the commands of the station commanders. A community-based policing concept was adopted and implemented. A minimum of 100 residents are being visited per week per station. Intelligence driven policing strategies were implemented within black spots. Crime detection and solving rate of reported crimes received priority attention,” Mr Elizabeth explained.

So as a result of all these measures, he said, the Seychelles Police have successfully reduced crime for 2015. This has been possible through the dedication, commitment of the police officers and senior personnel attached to the force.

Apart from the achievements, the Seychelles Police have been empowered which resulted in better performance. There have been new appointments following the implementation and adoption of a revised police structure and policing model. Police officers were promoted or awarded long service medals with one being meritorious and one for bravery. An agreement was signed between Kenya and the force to provide training in capacity building while four police officers received training in GPS analysis.