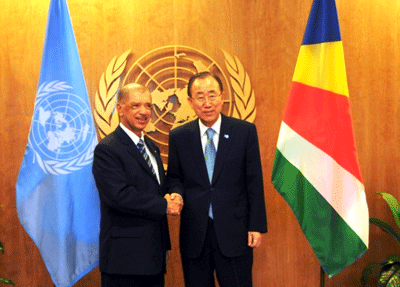 ‘We have a duty to change the world we live in’

We have a duty and an obligation to change the world we live in, to make it a better place for the present generation and for future generations, President James Michel has told the 70th United Nations General Assembly.

Mr Michel addressed the United Nations assembly on Tuesday and he joined other world leaders in deliberating on issues that are affecting the countries and the world.

The 70th United Nations General Assembly opened on Monday and it was the largest gathering of presidents and prime ministers ever at the United Nations. Some of them assembled in New York under one roof for the first time in years, and their job was to wrestle with global crises that they stubbornly disagree on, including climate change, the war in Syria, and a historic exodus of people fleeing conflict and hunger.

President Michel, who has been making Seychelles a world leader in sustainable development, placed emphasis on having a standard for global governance of the oceans and the seas, adding that Goal 14 of the 2030 Agenda is of particular importance to all small island developing states (Sids) and coastal states.

“It presents us with the unique opportunity to set a standard for global governance of the oceans and the seas. The goal of conservation and sustainable use of the oceans, seas and marine resources for sustainable development, provides the thrust for the Blue Economy. This concept has been adopted by many Sids as a mechanism to realise sustainable growth, based around an ocean economy and ocean governance,” said President Michel.

He noted that the Barbados Programme of Action, the Mauritius strategy and the Samoa Pathway are the key to this.

“For oceanic nations the sea is our lifeblood and the Blue Economy is the catalyst upon which we learn to thrive. But we cannot thrive in an environment of insecurity. Maritime security is of the utmost importance to the vast majority of Sids and to coastal states. In our part of the world, though piracy is on the wane, we must remain vigilant. However, as we have demonstrated in the case of piracy, global alliances have made a difference in providing security when there was none,” noted President Michel who thanked the United Nations and other international partners for their support in Seychelles’ fight against piracy in the Indian Ocean.

Looking ahead to the Paris Climate Change Conference in December this year, President Michel called on all nations to use the little time left to build further momentum and support in order to reach an ambitious and universal agreement to combat climate change.

“Paris is not just another international negotiation. It will be the crucial and decisive moment of choice for all of us.

“We cannot allow ourselves to be condemned to the wrong side of history by our collective failure to reach an agreement. The stakes are too high. An agreement is within our reach provided we are able to summon collective political will and leadership. The time is now. We can make it happen. We must make it happen. We must fulfil promises and commitments made, especially in terms of financing options to build climate resilience. In this regard, we call on all developed countries to fulfil their commitments for the mobilisation of $100 billion annually, by 2020, for the operationalisation of the Green Climate Fund,” President Michel insisted.

The President then called on United Nations Secretary General Ban Ki-Moon at the UN headquarters in New York.