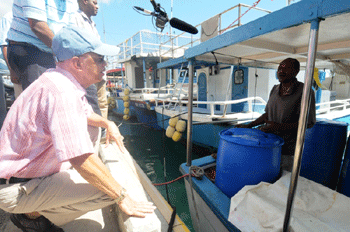 The government is doing its utmost to promote entrepreneurship and to ensure that that there is more ownership and wealth creation by Seychellois, President James Michel has said.

The president noted that he is aware that some government departments are not delivering on time and that a lot of emphasis is being put on easing permissions to do business and to get access to credit on time.

The president explained that a lot of progress has been made and measures have been put in place to improve ease of doing business here, but there needs a complete change of mindset on the part of officials to make things move faster.

“There is a need for a complete change of mindset to reduce the level of bureaucracy. We should not only give people the reasons why they cannot do a business but rather tell them how and what to do to open their business,” said President Michel. 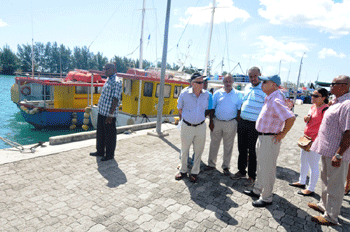 At the Fisheries Industrial Estate, the President visited selected areas such as the warehouse of the fish processing plants which are not in use at the moment as their structure is being amended to accommodate the chosen services of the entrepreneurs and also enable cooling facilities.

Mr Michel also had discussions with fishermen who expressed their constraints and most of them spoke about the lack of ice and proper maintenance of the existing ice plants.

The president was then briefed on the proposed extension of the fishing port area which will include an ice plant project. The four-stage extension is expected to provide better facilities to fishermen using this port. 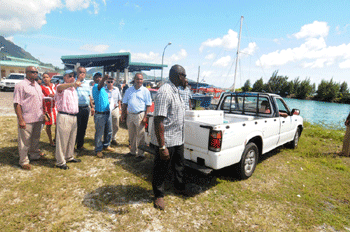 President Michel then visited the Small Medium Enterprises (SME) building on zone 18 and he was received by the Minister for Investment, Entrepreneurship Development and Business Innovation, Michael Benstrong; principal secretary for Entrepreneurship Development and Business Innovation Maryse Berlouis; principal secretary for Project Planning and Implementation with the Ministry of Land Use and Housing Yves Choppy, and chief executive of the Industrial Estates Authority, Vic Tirant.

The construction of the building started in January 2014 and is expected to be completed by mid-May. The 59 rooms have already been allocated to tenants who will soon start their small businesses there.

President Michel said his visit at the port was a follow-up of his previous visits to see the infrastructure in place and the progress made in order to make it easier for fishermen to develop the Blue Economy concept.

“I’ve seen some progress and I have seen some problems equally that need to be addressed. I have instructed the Minister for Fisheries and Agriculture (Wallace Cosgrow) and the SFA to ensure the process of resolving these problems is speeded up and also to ensure that we progress in that respect. A lot of people have invested in buying boats to do different types of fishing but what we have seen is that there are not enough facilities on land to support that sector. This is where SFA and the Ministry of Fisheries and Agriculture should put a lot of emphasis in building more ice plants as this is a major issue that has been brought to my attention today (Saturday). The fishermen want to go fishing but there is no ice. This is an issue that needs to be addressed as soon as possible,” said the President.

In relation to the extension of the port, the president explained that this project is being assessed by Japanese experts following his official visit to Japan in 2013. The proposed extension of the Providence port will provide facilities for local fishermen, making it easier for them to contribute in the development of the Blue Economy concept.

The President also said he is pleased to see the progress made on the Small Medium Enterprise building where young entrepreneurs will soon move in to start their businesses.

“I think it is very popular. It has already got all the tenants that it requires to fill up the building and very soon we will start the construction of another one at Ile du Port. So I think this is the way forward and this is why we have to make it easier for our small entrepreneurs to start and to progress in their creation of wealth. Here at this micro-enterprise centre they will have a grace period of six months for them to start their business, then of course the facilities will be provided to them on a rental basis which is affordable,” he said.

He added that the “government is doing its utmost to promote this sector of business, to promote entrepreneurship and to ensure that that there is more ownership and wealth creation by Seychellois”.

2015-04-13
Georges
Previous: SME building at Providence set to welcome tenants
Next: All is set for the fifth anniversary of Carnaval International de Victoria that will be officially opened in Seychelles on the 24 April