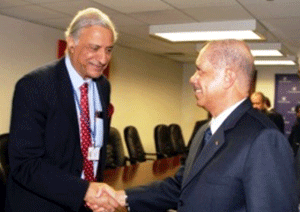 They discussed ways to harmonise positions for discussion ahead of the Commonwealth Heads of State Summit to be held later this year in Malta and also to address key projects between the institution and Seychelles.

President Michel thanked Mr Sharma for the technical support Seychelles has received thus far from the Commonwealth to fulfill its developmental objectives.

He further spoke of the concrete actions that Seychelles has undertaken to promote the Blue Economy and ensure a viable and sustainable ocean primarily through initiatives like the “debt for adaptation swap” and the marine spatial plan.

“Seychelles is one of the smallest members of the Commonwealth yet we hold weight and moral authority beyond our size. Seychelles is proudly a member of this organisation and we will continue to contribute to its vibrancy,” said President Michel.

The two statesmen spoke at length on how the Commonwealth’s strengths may be utilised to influence and effect change on numerous global issues, most notably on climate change, human rights, gender equality and building strong resilience among small island states within the organisation and further afield.

Mr Michel also had positive discussions with the secretary general on the election reform process in Seychelles. Mr Sharma took note of the positive measures taken.

On his part, Mr Sharma has solicited Seychelles’ support for the Commonwealth Trade Finance Facility seeking to ensure greater use of trade finance contributing to the growth of smaller economies, which would otherwise be at a disadvantage. He added that this is in line with this year’s Commonwealth theme ‘Adding Global Benefit’.

Also present at the bilateral meeting were the Minister for Foreign Affairs and Transport, Joël Morgan; Seychelles ambassador to the United Nations, Marie-Louise Potter and the Diplomatic Adviser to the President, Ambassador Callixte d’Offay.