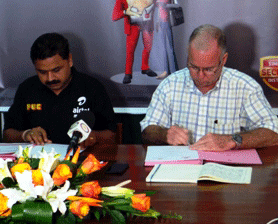 Customers registered with the Airtel Money scheme can now pay their water and electricity bills conveniently wherever they are without the hassle of wasting precious time in long queues.

This is possible now that the Public Utilities Corporation (PUC) has adopted the scheme devised by Airtel to further improve convenience for payment of utilities bills for its customers.

The partnership and cooperation between Airtel Seychelles and the PUC was formalised through the signing of a memorandum of understanding (MoU) at the PUC’s Electricity House Roche Caiman on Tuesday morning.

This was in the presence of the chairperson of the PUC board Eddie Belle as well as its other members, invited guests and representatives of both companies.

Meanwhile as the Airtel Money payment scheme will benefit Airtel registered customers only, the PUC has announced that it will continue in its endeavour to offer all its other customers more payment options and different outlets in order to improve the ease and reduce the length of time spend for them to pay their utilities bills.

The Airtel Money payment scheme, which has been described as convenient, secure and reliable, allows customers to use money they have transferred through their mobile phones to pay their bills by simply following a few easy steps on their phones and getting an instant confirmation that the transaction has been successfully completed.

Customers who want to register for the service can get more information at any Airtel and PUC services outlet.

The agreement between the two parties was signed by Harsh Kharbanda, acting managing director and head of commercial at Airtel and Philip Morin, the chief executive of the PUC.

Speaking after the signing and exchange of documents Mr Kharbanda said conducting payment transactions using Airtel Money transfer is very simple and safe and it is a service that is being used worldwide by Airtel clients and it is a very successful mode of payment.

“People are now using phones as the first medium to do their transactions,” Mr Kharbanda noted.

Mr Morin pointed out that adopting the Airtel Money scheme comes at an opportune time to respond to customers’ requests that the PUC introduce other mode to ease utilities payment convenience for them.

“It will also pave the way for the PUC to introduce other modes of payment in the future,” Mr Morin added.

Meanwhile Wingate Mondon, the PUC’s chief commercial officer, has given details of the PUC’s other initiatives to continue improving its services.

He said PUC customers can expect faster payment services at the counters during the course of this month as the corporation had been reviewing its internal procedures and these include introducing a new software at its payment counters.

Although staff were taking some time to get used to the new system which had led to a slowing down in service delivery, especially during the first few weeks of its setting up, the situation has now improved, Mr Mondon noted.

He also noted that a new counter has been introduced to deal with and process company cheques, freeing the way for normal customers.

“Negotiations with the Seychelles Commercial Bank has been fruitful and today any customer of the bank can pay their bills directly at the bank’s counters at the Anse Aux Pins branch, La Digue and Grand Anse Praslin, but not Victoria which service is not yet operational,” Mr Mondon added.

He further noted that the PUC is in the process of finalising details for the banks’ ATM card holders to also be able to settle their utilities bills using their cards.

Mr Mondon also explained that the PUC is in talks with the Seychelles Post Office and is on the verge of concluding an agreement with them for PUC customers to pay their bills at the post office in Victoria to start with but will be extended to other post offices across the country in due course.

“The service is not in place yet but it is expected to be ready by the end of this month,” Mr Mondon pointed out.

2016-02-04
Georges
Previous: Commemoration of the 68th Anniversary of Sri Lanka’s Independence
Next: Authorities step up measures to prevent Zika virus entering the country