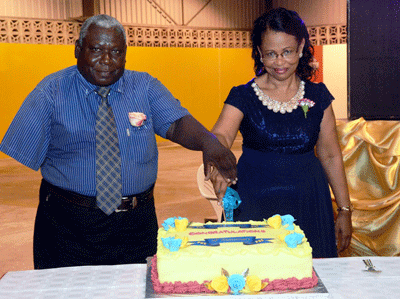 They also had the opportunity of discovering the poetic talent of their public relations and communication manager Marie-Antoinette Laurence, who in her poem artistically related to her fellow workers what her profession has brought to her. 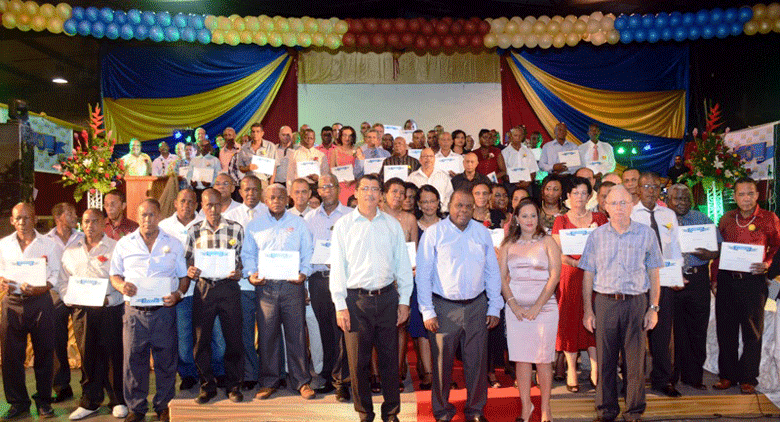 The Public Utilities Corporation (PUC) is celebrating its 30th year of existence this year.

To mark the occasion, a gala dinner for all its workers was organised on Sunday evening at the NSC Hall, where those who have spent more than 25 years with the company were rewarded.

Some of the faithful employees have even given more than 40 years of their lives to providing water, electricity and drainage facilities to Seychellois households, businesses and other services. This was way before the then Electricity and Water Divisions merged to become PUC.

One of them is Patrick Gappy, who has finally decided to retire after 42 long years with the utilities’ service. He started as a clerk in 1973 and has parted as the audit manager, after going through the ranks of accountant and senior accountant. He said that he has seen PUC develop in the interest of all Seychellois and in spite of being offered other jobs elsewhere, has stayed all those years as he always saw his future in the company.

Mr Gappy, who added that he owes his long service to qualities like honesty, loyalty, patience, commitment and sense of belonging to the organisation, is calling upon young people to step in his shoes and seize the opportunities offered by PUC, for the good of the Seychellois people.

“If you persevere, you will succeed,” is his message to them.

Although Mr Gappy said he now has time to relax at home, he has not abandoned work completely as he has wisely turned himself into an energy and accounting consultant.

Minister Dogley thanked what he called the “PUC champions” for their great contribution, adding that they are models that all other organisations envy.

He remarked that they are part of the company which represents the motor of Seychelles’ development, through the two essential commodities that it supplies.

“In Seychelles, we do not have electricity interruptions three times a day as it is the case for many other African countries. This is because people work. Ninety five percent of our households and businesses have access to treated water and ninety seven percent to electricity. Those statistics are comparable to those of Europe. Government recognises the effort you have made. Without you, Seychelles would not have become one of the most developed countries in the world. You must teach your knowledge and skills to the younger generation and tell them how you succeeded, to permit them to develop themselves also,” Minister Dogley told the workers.

The minister responsible for energy added that PUC will continue to invest in staff training and in new projects, such as the ones to improve the capacity of the La Gogue Dam as well as the sewage system on La Digue.

PUC managing director Philippe Morin complemented the minister’s words by adding that in spite of difficulties, the water and electricity situation in the country has much improved as a result of investments in desalination plants, power stations and competent staff.

While he was thankful to the employees for their service, he warned of challenges ahead due to a rise in demand.

It was two long serving employees, Suzy Kallé and Emile Joseph who had the honour of cutting the anniversary cake before the PUC family enjoyed dinner and danced the night away with the sounds of the DJ and the PUC band.