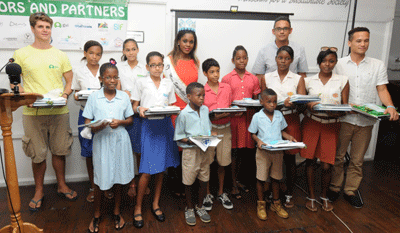 The third Seychelles Sea Turtle Festival was held during the weekend, with as main activity a family fun day involving various activities on Beau Vallon Beach on Saturday.

The yearly festival aims at celebrating the sea turtles of Seychelles and educating people on the importance of their continuing protection.

At its launch on Friday afternoon at the Natural History Museum in Victoria, the principal secretary (PS) for environment Alain Decommarmond said that as a result of conservation, “the sea turtle has a bright future”.

This declaration from an environment specialist surely echoes as good news to conservation enthusiasts as well as the generally environment-loving Seychellois population, compared to a not too distant past when the animal was high on the extinction danger list.

The launch ceremony was attended by school children, teachers, representatives of conservation NGOs and Miss Seychelles … Another World 2015 Linne Freminot. It also included a presentation by young Noah Jean-Louis of Beau Vallon secondary school, who shared his conservation experience gained from activities on Darros and Aldabra Island.

Mr Decommarmond, who described the sea turtle as “a favourite creature of many Seychellois”, remarked that the festival is becoming bigger and more popular as more people are getting involved in conservation.

As a result of the effort and continuing interest in preservation, he also said that poaching is decreasing compared to some years back.

He  thanked all those actively involved in turtle protection including the festival organisers, partners and sponsors.

“The celebration is testimony of your commitment and will permit to transfer the science to children,” he told them.

Wishing that the partners continue to enhance their communication, he however stressed on the need to be vigilant in order to stop some ongoing illegal practices.

He remarked that the newly established Environment Court will be another important instrument in the continued fight in favour of sea turtles’ survival.

During the launch ceremony, winners of various competitions as part of the Sea Turtle Festival received their prizes. They were as follows: