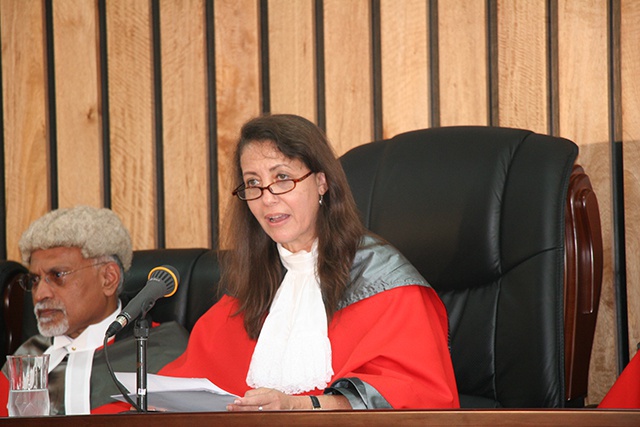 In an open letter Twomey cited incidents of ‘abuse’ suffered at her home at Bel Eau, on the outskirts of the Seychelles capital, Victoria. The letter was addressed to Wavel Ramkalawan, leader of the Seychelles National Party, SNP.

In her letter Twomey called for Ramkalawan to “speak to your supporters and stop unleashing hatred and violence on the judiciary.”

The letter was posted on several Facebook groups and was first relayed by Seychellois artist Emmanuel d’Offay, who told SNA he was authorized by Twomey to post it.

He said only that he “would follow all the legal procedures concerning the actions he filed before the Constitutional Court.”

There’s been heightened tension the past week following the ruling of the Constitutional Court of Seychelles, which rejected two petitions lodged by the SNP leader requesting the annulment of the December presidential election results.

The President of Seychelles James Michel, leader of the ruling Parti Lepep, was declared the winner after a historical run-off with 50.15% of votes.

The leadership of the opposition have expressed their discontent with regards to the Constitutional Court ruling and have criticized the decision of the Seychelles judiciary.

In her letter the Chief Justice said she talks of personal attacks.

“Some of your party supporters took the liberty to come to my house to abuse me,” said Twomey in her letter.

“Someone spat on me yesterday. Tomorrow it might be worse,” she added.

SNA has not been able to confirm whether Twomey has filed a report with the Seychelles police.

For now, the Chief Justice has decided to move to a safer place. According to a family member she is well and was resting before resuming work on Tuesday.

At the opening of the Supreme Court in January, the chief judge had already complained of intimidation even before the hearings of the SNP petitions had begun.

Tension in Seychelles, a 115-island archipelago in the western Indian Ocean, is likely to remain high over the coming months. Legislative elections should be held before the end of September.