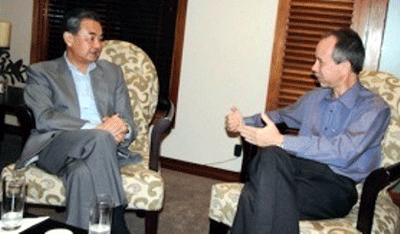 The Minister for Foreign Affairs and Transport, Joël Morgan, has held talks with Wang Yi, Foreign Minister of the People’s Republic of China. The Chinese foreign minister was leading an eight-member delegation who transited through Seychelles on Friday evening before continuing on a tour of African states.

Minister Morgan took the opportunity to engage his Chinese counterpart and stressed the importance of the Sino-Seychellois relationship.

“Our own growth is inextricably linked to Chinese development. China has been a long-time friend and an invaluable partner of Seychelles throughout its development,” said Minister Morgan.

Minister Morgan thanked the Chinese government for its constant engagement across numerous fields in Seychelles and emphasised “the excellent bilateral relations with China is a hallmark of the world’s largest nation effectively cooperating with one of the smallest in an environment of mutual respect”.

Seychelles established diplomatic relations with the People’s Republic of China on June 30, 1976, a day after it gained its independence from Britain.

Next year will mark forty years in the two countries’ relations. As such to commemorate the event Minister Morgan has invited Minister Wang to take part in the celebrations.