A major exercise in implementing the Seychelles national contingency plan for anti-pollution, search and rescue and firefighting in the waters off Mahé was conducted last week.

The exercise was organised by the EUCAP Nestor, in collaboration with Seychelles’ security agencies. 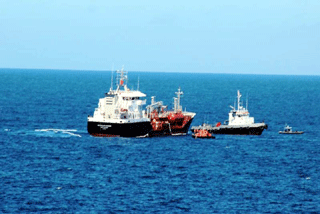 The Seychelles Petroleum Company (Seypec) took part in the exercise with a tanker, the MT Seychelles Paradise.

The aim of this kind of exercise is to pre-emptively verify the level of coordination and cooperation among national agencies and international partners in case of an environmental incident at sea.
These exercises are also vital for testing the capability of the national agencies in implementing their Oil Spill Contingency plan, Search and Rescue Plan and the response in case of fire on board a ship.

The scenario envisaged during the exercise involved – among others – a collision causing an oil leak, fire on board of a tanker, ferry boat sinking and crews abandoning vessels caught by currents and drifting away from the site of the incident. 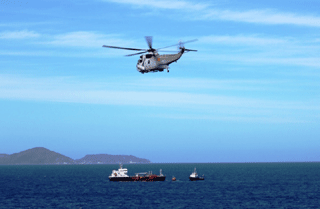 In this scenario, the Maritime Operations Centre of the Coast Guard coordinated a response which resulted in immediately dispatching speedboats and a Coast Guard patrol ship to the area of operations. The Seychelles Air Force was involved sending an aircraft to the area. The Seychelles Ports Authority took part in the action by sending a tug with floating booms to contain the oil spill, while the fire and rescue services intervened to put out the fire.

The EUNavfor Flagship SPS Galicia operating in the vicinity also headed toward the incident to support the on-going activities. A search and rescue operation was initiated to locate the crew of the ferry boat adrift in the life raft and sailors in the water. The Seychelles Air Force and a helicopter from the SPS Galicia were committed to this search and rescue operation and eventually all the crew members were located and brought to safety by the Coast Guard ppeed boats in cooperation with the EUNavfor helicopter for initial medical treatment on board the SPS Galicia.

With the fire under control, personnel on board the tanker, the tug and Coast Guard vessels focused their action on the containment of the oil spill. The Division of Risk and Disaster Management deployed their assets to intervene on land and eventually the oil spill operation was concluded successfully.

One year ago a similar operation was organised by the EUCAP Nestor. This year’s exercise proves that standards in dealing with this kind of disaster have been maintained.

A number of dignitaries, including the commanding officer of the Seychelles Air Force Major Michael Pouponneau observed the exercise first hand from the SPS Galicia together with representatives of the Seychelles People’s Defence Forces, Ministry of Environment, Energy and Climate Change, and the Indian Ocean Commission.

“Being able to combat oil spills is extremely important for the Seychelles,” said the commanding officer of the Seychelles Coast Guard, Lt Col Simon Dine. “Our pristine maritime environment and shoreline are the main attraction for the many tourists that visit our shores. Our tourism industry, an integral part of our Blue Economy, must be protected from pollution.”

The Seychelles Ministry of Environment, Energy and Climate Change stressed in a statement that “such exercises are key moments to get all partners involved together and ensure that good cooperation exists so that the procedures are followed accordingly in the event of a real major oil spill incident”.

The EUCAP Nestor is a civilian EU mission, under the Common Security and Defence Policy, which helps countries in the Horn of Africa and the Western Indian Ocean in strengthening their capacity to ensure maritime security and in particular to fight piracy.

The accompanying photographs show some of the actions during the exercise.