SIF and SFA lay base for future research partnership 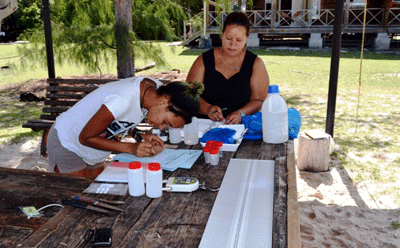 The Seychelles Fishing Authority (SFA) and Seychelles Islands Foundation (SIF) carried out a pilot phase of a potential research partnership last month at Aldabra to undertake some collaborative marine monitoring.

The SFA vessel RV L’Amitie arrived at Aldabra on April 2 with a full crew and three members of the SFA research department. One of the aims of the trip was to repeat surveys of the coral reef communities (fishes, benthos and coral juvenile abundance) at nine sites around Aldabra Atoll, which are part of SIF’s long-term marine monitoring programme, to assess the extent and severity of the current coral bleaching phenomenom around Aldabra and Seychelles.

A team of four SIF and SFA divers carried out these surveys over a period of six days.

Initial findings were that there was a high level of bleaching at all sites ranging from 60-99% of all corals being affected to some degree. 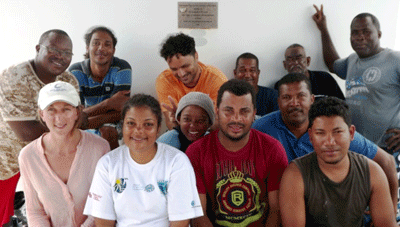 The second aim of this research trip was to extend the data set and sampling collected from Aldabra’s subsistence fishery to include valuable information about fish stocks, stock health and genetic connectivity.

SFA research technician Maria Cedras was stationed on Aldabra for a week and led the training of the research staff in extracting the otoliths (ear bones) that can be used to age fish; gonad samples for information on spawning productivity and seasonality; fin clips for DNA analysis to assess population structure and connectivity; and liver and muscle samples for analysis of stable isotopes, content of lipids, fatty acids and heavy metals, which will be analysed to determine fish health and information on trophic ecology.

The sampling programme will focus on four species that are currently being caught at Aldabra and are on the priority list of species on the SFA demersal management plan. These include; Aprion virescens (Zob Gri/Green Jobfish), Lutjanus bohar (Varavara/Red Snapper), Epinephelus fuscoguttatus (Vyey Goni/Brown Marbled Grouper), and Epinephelus polyphekadion (Vyey Masata/Camouflage Grouper).

The week was a fantastic opportunity for the two organisations to work together and cement a research partnership for the future. A great deal was achieved but a lot fun was also had with many new friendships made.

Our sincere thanks to Captain Gerard Ernesta and his crew for such a successful week.

2016-06-27
Georges
Previous: Tourism academy students head for work attachment in Mauritius
Next: A great opportunity for intergeneration groups to reflect on our Constitution